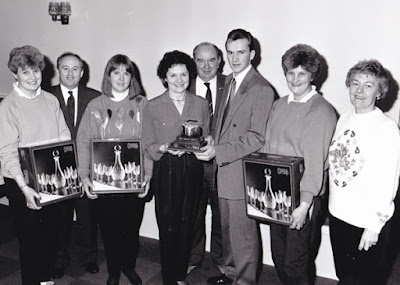 CIP-100. I've chosen this special photograph as the 100th upload of the Curling Image Project because it is a rare thing, amongst the most unusual in my photograph collection. It's a wirephoto, although more correctly this example is a 'laserphoto'. In the days before digital cameras, the internet and email, a sports photographer had quite a challenge to get photographs back to the newspaper. Film would be developed on site at the event and then passed through a special fax-like machine, down the telephone lines, and printed out on an identical machine at the newspaper. The photo above shows the Scottish team (Christine Allison, Margaret Scott, Kimmie Brown and Carol Dawson) in action at the 1989 World Championships in Milwaukee, Wisconsin, USA. The photographer was Jacques Boissinot working for Canadian Press. The original shown above is on very flimsy paper, the output from the laserphoto machine at the newspaper. More about wirephotos here. (The photo itself is 7.7x8.25in, plus the margins.) 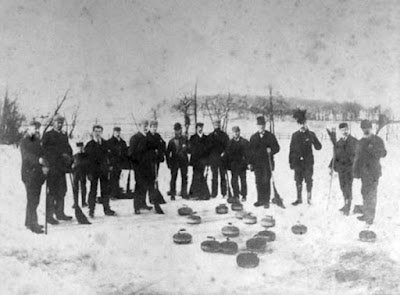 CIP-101. I acquired this photo at an antiques fair earlier this year. It shows a group of curlers posing outside, but where and when? The photograph is rather grubby, but is remarkable for its large size. (14.5x11.5in print, photographer unknown.) 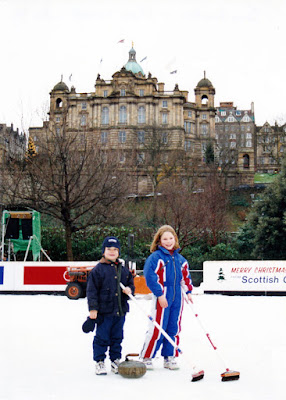 CIP-102. William and Rebecca Kesley are on the temporary 'Winter Wonderland' ice rink in Princes Street Gardens in 1999. This photo appeared as the cover of the December 1999 Scottish Curler magazine. The Currie and Balerno Curling Club eventually managed to stage a bonspiel on the rink with four teams on a Sunday morning, although their first attempt had been rained off. Used in the Xmas season for skating it was quite a challenge for Scott Henderson to prepare curling ice on the temporary rink. This was the second year in a row that the Princes Street Gardens' rink had seen curlers on the ice. (5x7in print, probably by Robin Crearie.) 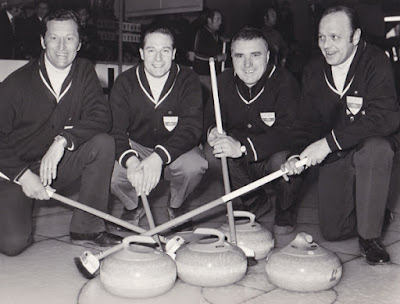 CIP-103. L-R: Cesare Canepa (skip), Werner Oswald, Jakob Kluser, Hans-Ruedi Werren. This Zug CC team had just won the Swiss Championship in 1971 at Geneva. The Swiss team went on to compete in the Air Canada Silver Broom World Curling Championship at Megeve, finishing in fourth place after winning a tiebreaker against Sweden, but losing the semifinal to Don Duguid's Canada (who beat Scotland in the final). (8x6in print, by Ervin Sautter.) 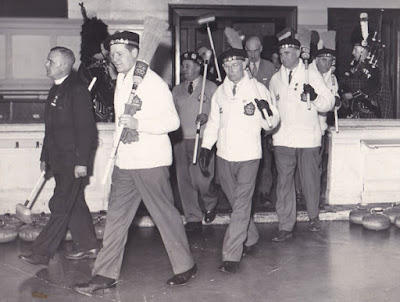 CIP-104. Ted Pattee leads Bill Mackay, Geoff Rogers and Hal Clarke on to the Haymarket rink in the 1960 Canadian Tour in Scotland. The Scots are being led out by the Rev Bill Good. (8.25x6.25in print, Photo Illustrations Scotland, Cockburn Street, Edinburgh.) 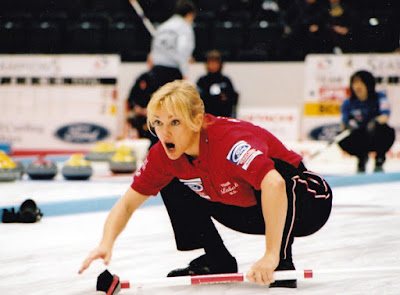 CIP-105. I need someone to help me out with this one. The Canadian women's team at the 2000 Ford World Championships at Braehead was Kelley Law, Julie Skinner, Georgina Wheatcroft, and Diane Nelson. Which one of the team is this? (6x4in print, probably by Jim Law.)

ADDED LATER: A quick response on Twitter, and from Janice Rankin on Facebook, confirms this is Diane Nelson (now Dezura). Thanks to everyone. Rock on the 'front end union'!

Photos are as credited where the photographer is known. Check the archive (on the right) for previous Curling Image Project posts.
Posted by Bob Cowan at 14:46