What Future for the Bear?

Charles Liechti, from Bern, Switzerland, is a name you may not know. He was a real curling enthusiast. He came to Scotland in 1961 to play in the 'Worlds Curling Championship' at the Edinburgh Ice Rink, Haymarket. He did not come as part of a team. Rather, he came alone and played lead on the team skipped by local curler James Sellar. But before I carry on with Charles Liechti's story, some background to the 'Worlds Championship' competition is needed. 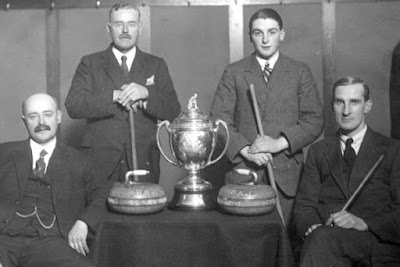 The 'Worlds' tournament was first held in 1922, an open competition for Scottish curlers held at the Haymarket Ice Rink. That's the winning team in the very first competition, above. L-R: Willie Jackson, Robert Jackson, Laurence Jackson and Tom Murray. The trophy was presented by the Edinburgh Ice Rink Ltd. The ice rink at Haymarket had opened for business in 1912. Robin Copland has written about curling in Edinburgh, and the 'Worlds', here. 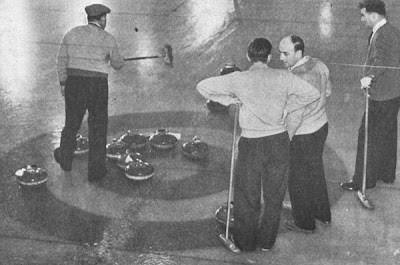 This is a scene from the penultimate end of the 1954 'Worlds' final at Haymarket, between teams skipped by James Sanderson and James Sellar. 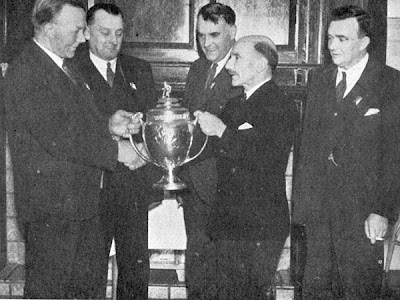 A A Wighton, Chairman of the Edinburgh Ice Rink, presents the trophy to (L-R) James Sanderson, John Cooper, Alec Allison and Robert Moffat in 1954.

In 1961, when Charles Liechti came to take part in the tournament, it was still an open competition at the Haymarket rink, and attracted a large entry. 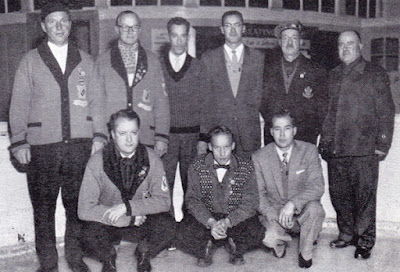 That's Charles Liechti on the right of this photo, with teams from Canada and Norway which took part in the 1961 'Worlds'.

Charles Liechti and Sandy Sellar are the sweepers, directed by Jimmy Sellar, with Bob Dick behind. Although the final game was won by Bob Dick's side, Charles Liechti became the first overseas player to reach the 'Worlds' final! 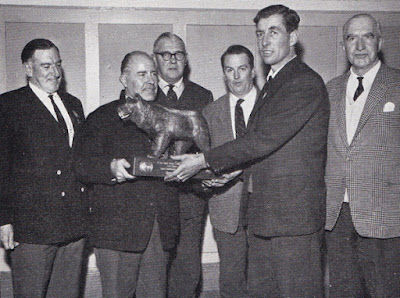 Charles Liechti's experiences as a member of the runners-up team in 1961 must have left a big impression on the Swiss curler. Fast forward four years. In 1965, here he is presenting what is described as a 'bear statuette' to the runners-up in the 'Worlds' competition. L-R: James Alexander (Vice-President, Royal Caledonian Curling Club), Charles Liechti, Bert Stewart, Ivan Clark, Bob Kerr (skip) and Hugh Beveridge. 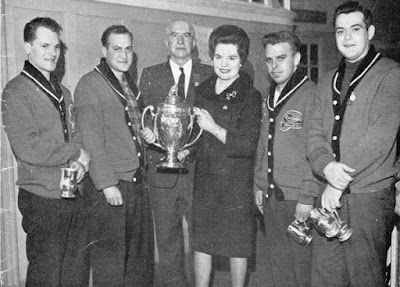 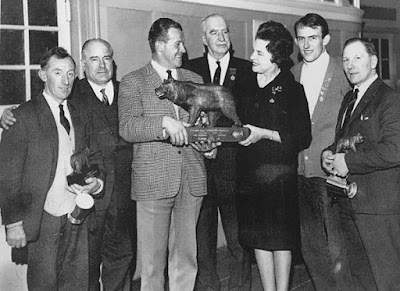 Charles Liechti was back in Edinburgh in 1966 too. Here he is with the presentation of the Bern Bear (as it came to be called) to the runners-up in 1966. L-R: Bobbie Baxter (2nd), Charles Liechti, James Young (skip), Hugh Beveridge, Mrs Hugh Beveridge, Bob Christie (3rd) and Tom Kerr (lead). But look what individual prize the runners-up received. Each member of the Corstorphine rink received a small replica of the big trophy. 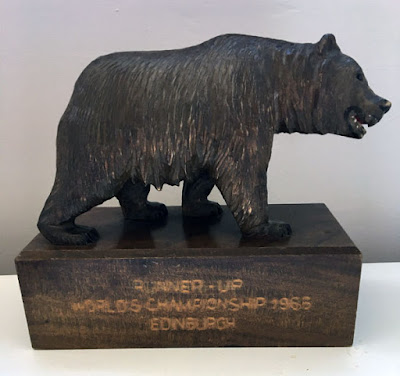 Here's a close up of one of the individual prizes. It was great to learn recently that Andrew Kerr still has the trophy presented to his father in 1966. 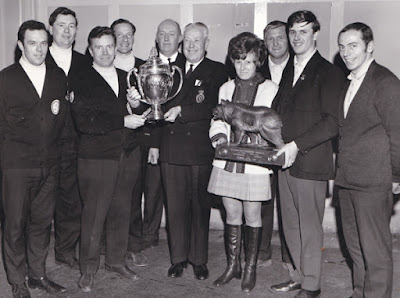 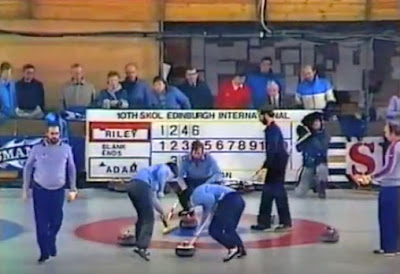 In the early 1980s, the Edinburgh International was one of the competitions covered each year by Scottish Television in the run up to the Glasgow Silver Broom. In 1984, Skol was the title sponsor. To see what this was like, there's a ten minute edit of a Graeme Adam v Mike Riley game on YouTube from 1984 here (screenshot above). 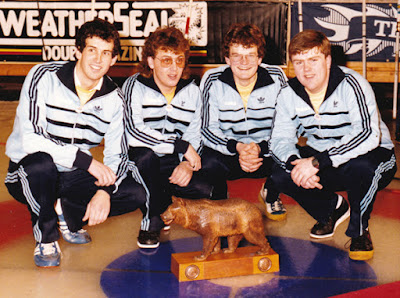 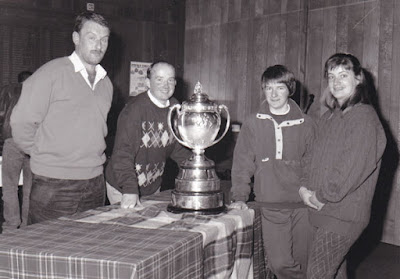 For three years in the early 1990s, the Edinburgh International competition was for mixed teams. Here is Colin Hamilton with Vicky Gumley (far right), Trevor Dodds and Edith Butler with the 'Worlds' trophy in 1992. 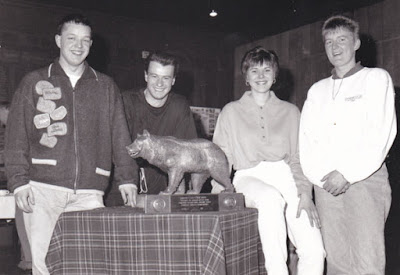 And here, in the same year, are (L-R) Iain Stewart, Julie Hepburn, Warwick Smith and Fiona Bayne with the Bern Bear. 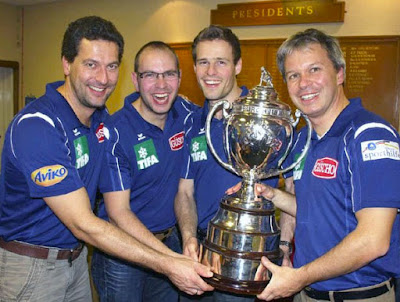 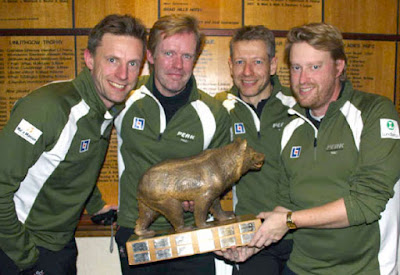 The Edinburgh International trophy and the Bern Bear now reside, somewhat forlornly, in the trophy cabinets at the Murrayfield Curling Rink. They were last played for in 2016, when the Edinburgh International trophy (the 'Worlds' trophy) was won by Karel Kubeska and his Czech team of Jiri Candra, Martin Juric and Lukas Klima. The Bern Bear was won by Bruce Mouat, with Bobbie Lammie, Gregor Cannon, Derrick Sloan and Alasdair Schreiber.

I would like to believe that one day both trophies will be played for again in a significant competition. I'm sure that Charles Liechti would echo that sentiment.

My thanks go to Andrew Kerr for the idea for this article by telling me about his father winning the Bern Bear. He also provided the 1966 photo, and that of the individual replica. Robin Copland's article on the history of curling in Edinburgh and of the Worlds' competition (here) provided much background. Thanks go to him, and to Lindsay Scotland, for encouragement. Other photos are from various Scottish Curler magazines, or from my own archive. The competition had its own blog from 2009-2011, and the posts from these years are still online here.
Posted by Bob Cowan at 15:58

I have the medals of W. Charles Johnstone who won the Worlds in 1923. He became a Vice President of the RCCC and passed away in Moffat just over twenty years ago (at least that's how long I have had the medals)
Graeme Adam