The curling stones at the bottom of the ocean 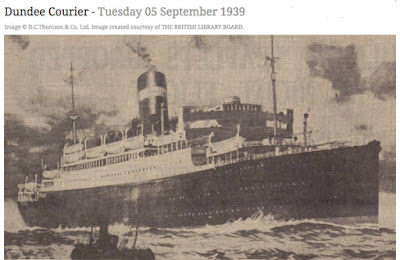 On the evening of September 3, 1939, the SS Athenia was torpedoed by a German U-boat, the first UK ship to be sunk in such a way in WW2. The Donaldson line ship was bound for Montreal via Belfast and Liverpool, and when she encountered U-30 she was carrying 1,103 passengers, and 315 crew. One hundred and seventeen passengers and crew died as a result of U-30's action.

The Wikipedia entry about the SS Athenia is here. I was interested to read that 'Wartime German authorities denied that one of their vessels had sunk the ship'. 'Fake News' is not a recent phenomenon.

In the holds of the Athenia was a consignment of curling stones, bound for Canadian curling clubs. I had heard rumours of this, but I had not got around to researching the subject. However, a fellow curling historian was on the case, and last year David M Sgriccia, aka Angus McTavish, of the Detroit Curling Club, posted an article on his blog, see here.

I'll let David tell the story in his own words. I commend his article to you, and I know the hours he must have spent on research before he could write it. There's a lot in newspapers of the time about the loss of the Athenia, and even about the fact that it was carrying curling stones being sent to Canada by Andrew Kay and Co. But David, with help from Andrew Wyllie of Kays Curling, has unearthed the facts and figures, and we now know just how many curling stones lie at the bottom of the ocean, and to which clubs these had been sent.

I do want to quote just some words from his article, as it reflects how I feel about the story too. "It was a big loss for curlers to lose 278 curling stones, but we should never forget the 117 people who died that day from the sinking of the SS Athenia or the millions that died during the war years that followed."

The top image is courtesy of the British Newspaper Archive.
Posted by Bob Cowan at 20:26

Thanks for this post Bob I hadn't heard this story.I'm struck by the ability of Kay to ship each order of 40-50 pair of new stones every three weeks. I was able to visit the Mauchline manufacture site (just east of Ayr) while living in the area and this was a small operation of 4-6 people..here's a link for a brief bit about Kay from the World Curling Federation website..http://www.worldcurling.org/from-island-to-ice-a-journey-of-curling-stones.

Wow...all those stones at the bottom of the ocean! What a waste of good granite and all the people who died that day!