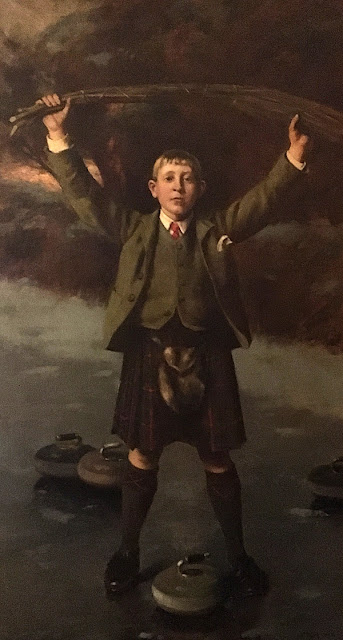 You will find this wonderful painting, an oil on canvas entitled 'A Young Skip', at the Scottish National Portrait Gallery in Edinburgh. The painting is a large one, 204 cm x 109 cm excluding the frame. It's more than six feet tall if you prefer the old measurements. A young man is shown on the curling rink, standing on the ice with a 'broom cowe' above his head, signalling for a guard. He is wearing a Murray tartan kilt. It was painted by Charles Martin Hardie in 1907, and was exhibited at the Royal Scottish Academy in 1908. Its inclusion among the 539 paintings in that exhibition is described by the Dundee Courier critic, "A Young Skip, a portrait of a boy with curling broom raised over his head and curling implements at his feet, is exhibited by C Martin Hardie and is rich in colour and happy in effect."

The boy's name is John Darg Laing, who was born on December 29, 1897, so he was nine years old in 1907 when his portrait was painted. He was the only son of John Thomas Laing of Crossrig, Berwickshire, who is noted on the birth record as a 'landed proprietor'.

John Darg Laing was educated at Loretto School, from 1907-1916. He went from Loretto to the Royal Military Academy, Woolwich, but injured his knee there and was invalided out. He then received a commission in the Royal Flying Corps, in July 1917, aged 19. He was killed three months later, on October 24, shot down by Walter von Bülow-Bothkamp, just two months before his 20th birthday. Second lieutenant John Darg Laing, of the 19th Squadron, Royal Flying Corps, is buried in Linselles Communal Cemetery, see here, and his name is listed on the war memorial at Lasswade.

John Darg's father, who presumably commissioned the painting of his son, was a keen curler. In the early years of the twentieth century, the family resided at Hollycot, Lasswade, a substantial property with three sitting rooms and five bedrooms, plus two more for the servants. There were six acres of land, and in 1906, John's father constructed a three lane tarmac curling rink in the grounds. 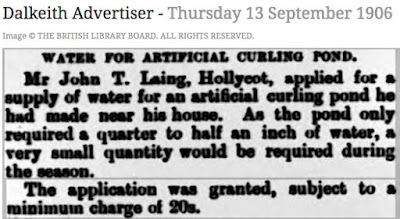 This newspaper clipping indicates that the rink was ready for the winter of 1906-07. The first game thereon was on December 12, 1906. It is likely that young John would have been on the ice at Hollycot, before he went off to school. 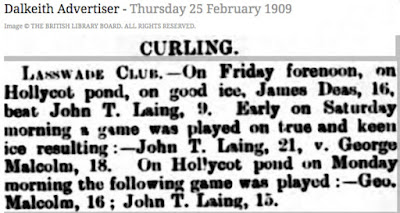 The rink at Hollycot was much used by the Lasswade Curling Club. One can find the results of games played there in the local paper, such as that above, from 1909. John (senior) was very much to the fore on his own rink. Later that year he skipped a Lasswade team at the Grand Match at Carsebreck, on November 24, 1909. He was Vice-president of the Lasswade CC at the time. But on December 13, 1909, he died suddenly at his home at Hollycot. He was 39 years old.

Mary Peterson Anderson Laing outlived her husband and her son, dying at Eskbank in 1955.

Why might the portrait been painted? It may well have been that the family wanted a portrait of their son before he went off to boarding school. Or it may have been a way of 'celebrating' the construction of the curling rink.

What can we say about the artist? Twenty-nine of Charles Martin Hardie's paintings are listed on the ArtUK website here, although his output was much greater. Curlers will know of him from his painting 'Curling at Carsebreck'. David Smith wrote about it here, and I have discussed the two women in the painting here. There are two versions of the Carsebreck painting. One is owned by the Royal Caledonian Curling Club and is currently displayed at Scone Palace. The other smaller version, now thought to be a preliminary study, is with the National Galleries of Scotland, which also cares for several of Hardie's sketches of those notables which were to be included in the big composite painting. The Carsebreck paintings date from 1899.

Charles Martin Hardie had an 'interesting' life. He was born in 1858 in East Linton, see biography here. He married Mary Lewis, an American, on April 23, 1889, in St Giles Cathedral. Charles was 31, Mary still in her teens. In 1891 they were living in Edinburgh, with a seven month old son, who later died. They then had a daughter, Constance.

In February 1895, Charles was elected member of the Royal Scottish Academy, but in that same year his marriage fell apart. Mary had an affair with Curtis Pounds, an opera singer, and Charles sued for divorce at the Court of Session, before Lord Moncrieff. The salacious details of the 'Edinburgh Society Scandal' (as one paper had as its headline) are recorded in various publications, see for example the Dundee Advertiser, Saturday, December 14, 1895.

The divorce was awarded, and Charles got custody of the daughter, Constance.

Charles remarried on November 22, 1899, to Margaret Somerville Smart (known as Mysie), who was the daughter of a Scottish artist, John Smart, who had died earlier that year. The couple, bought Garth Hill, in North Queensferry, and lived there with Constance until Charles died in 1916.

Looking at the dates of the Charles Martin Hardie paintings that I have been able to track down, it would seem that the artist's output slowed in the early years of the twentieth century. 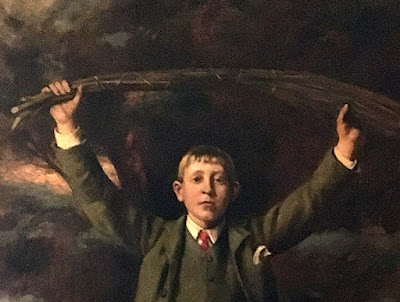 'A Young Skip' was not painted until 1907, when Charles was 49. Such is the unique composition and sensitivity of the painting that surely the artist must have been a curler himself. Just look at the broom that young John is holding. Such a sweeping implement would not have been in regular use at the time of the painting, but Charles must have been aware of the history of the sport, and decided that John Darg would look better holding a traditional 'broom cowe' than a hair brush! And showing young John clearly indicating a guard shot to be played, also implies an understanding of the game.

Indeed, Charles Martin Hardie WAS a curler. It is recorded that he competed in the Grand Match of January 31, 1899, around the time he was commissioned to paint the Carsebreck painting for the Royal Club. Thanks to Lindsay Scotland, we now know that he was able to enjoy the sport after his move to Garth Hill, playing with the local St Margaret's (Inverkeithing) Curling Club for several years, before becoming Vice-president in 1903, and President in 1907. Thereafter he reverts to being an ordinary member of the renamed Inverkeithing CC, and the final time he appears on the club's roster, as an 'occasional member', is in the Royal Caledonian Curling Club Annual for 1912-13. 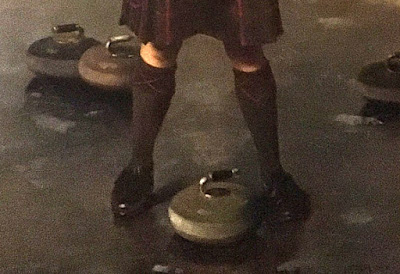 The stones that Charles has included in his composition are of interest too. That in the foreground, for which John Darg is asking for a guard, is an Ailsa Craig 'Blue Hone'. The two dark coloured stones are likely to be Burnock Waters. The pink coloured stone is the most interesting. It has an inscribed silver handle, and is a presentation stone, perhaps a 'Red Ailsa' or a 'Carsphairn Red'.

'A Young Skip' was painted in the year that Charles Martin Hardie became President of his curling club. It is of interest too that this painting is the artist's last recorded work that I have been able to find. I wonder if Charles had met John Laing (senior) on the ice at some point?

Did Charles travel to Hollycot to do preliminary sketches of young John, before completing the painting elsewhere, for example, in his studio? He could not have asked young John to pose for long holding the broom above his head!

What happened to the painting after John Laing (senior) died? Mary Laing outlived her husband and son for many years. It is tempting to assume that having the portrait of her son was a small comfort.

The painting came up at an auction of Paintings of Scottish and Sporting Interest at Sotheby's in Glasgow in November 1976, where it was bought by a well known curling family, who have since lent it to the Scottish National Portrait Gallery. Do visit! You will find it in the 'Heroes and Heroines' room on the top floor of the gallery. 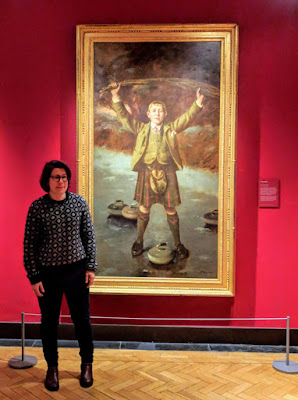 Thanks go to Imogen Gibbon (above), Deputy Director and Chief Curator Portraiture, National Galleries of Scotland, who also supplied the top picture, from which the two detailed images are cropped. I am also particularly grateful to Lindsay and Sue Scotland for their help and support. The image of the painting on the wall with Imogen is by Sue Scotland.
Posted by Bob Cowan at 15:08

Super research! Thanks for this story.

Thank you for the information about Charles Martin Hardie's life. My maternal grandmother Bea Hardie was painted 'by her cousin' and I was aware there was a whiff of scandal somewhere in the life of the artist but had not discovered what. Fancy finding it in curling blogspot!!

Trying to find relatives of Margaret Martin Hardie - Charles's 2nd wife - or of Charles himself - or his nephew, Martin Hardie - in connection with music project. Margaret was a composer.
Thank you.
Angela.

I have delved further into family history. How do I communicate this without being on this blog? David

My email address is on the sidebar of the blog. But if you cannot see it (if for example on a phone, not in 'computer' mode), it is skipcottage@gmail.com. Bob

Ok. I am on phone but will look on computer later. David

The state of advertising in the digital said...

Hi, I know a relative of Charles Martin Hardie! She is a musician from London.