The Women in the Painting: Scottish Curling Pioneers 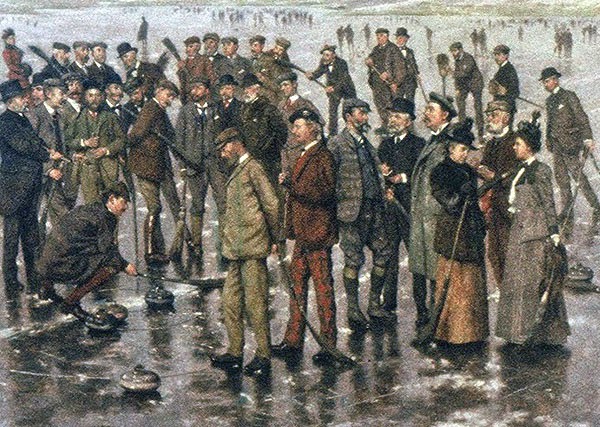 Charles Martin Hardie's painting, 'Curling at Carsebreck', dates from 1898. The image above is just part of the full painting which hangs in a room at Scone Palace, Perthshire. It belongs to the Royal Caledonian Curling Club. The National Galleries of Scotland have a smaller version, thought to be a preliminary sketch, and this can be seen online, here.

Hardie included likenesses of many curlers of the time, and this was discussed by David B Smith in an article about the painting here. I wondered just what contributions the two women in the painting had made to the sport, that they had been selected to be included in it. I have written already about one of the two women in the painting, Henrietta Gilmour, see here. Research on the other, Mrs Maxwell Durham, has led me to realise the uphill battle that the early pioneers of women's curling in Scotland had in becoming accepted within the male dominated curling fraternity in the late nineteenth and early twentieth century. 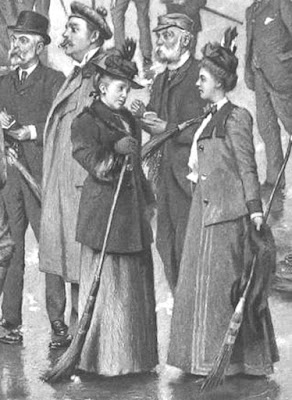 This detail is from the engraving of the painting published by Doig, Wilson and Wheatley, 90 George Street, Edinburgh, in 1900. The photogravure process had been carried out by the Groupil company in Paris.

Mrs Maxwell Durham is the woman on the left. As Janetta Sprot Stewart McCulloch of Barholm, Kirkcudbrightshire, she had married Thomas Maxwell Durham in Biarritz, France, in 1880. The couple's home was Boghead, near Bathgate. Thomas was a keen curler, a member of the Bathgate Curling Club, and was President of the club when it joined the Royal Club in 1880 (and indeed remained as its President until his death in 1899). Mrs Maxwell Durham became the club's patroness in 1882. She does not appear at first as a member of the Bathgate CC, but it is reasonable to presume she did learn to play on the Bathgate pond.

But by the following year, most of these these ladies, with some others, had formed their own club, the Boghead Ladies Curling Club, which became affiliated to the Royal Club at the AGM on July 8, 1897, election to club membership being 'unanimous'. 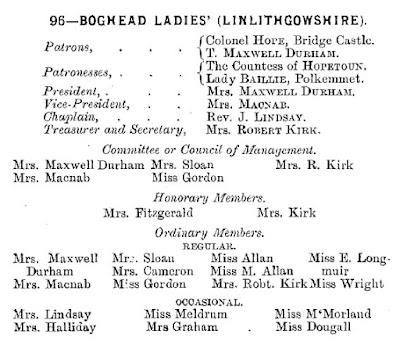 As you can see from the club's entry in the 1897-98 Annual, Mrs Maxwell Durham was its President. That Annual also suggests that the club had actually been first constituted in 1895. Janetta Maxwell Durham headed up the Boghead Ladies as its President for five years. Thomas Maxwell Durham died on September 19, 1899, and his obituary is in the Annual for 1899-1900. Janetta did not long survive her husband and died in Bath, England, on January 8, 1902, aged 66. However, the club continued to prosper. Mrs Robert Kirk took over as President in 1902, when it had eleven regular and five occasional members.

The sixteen strong Boghead Ladies Curling Club was the second women's club to join the Royal Club, Hercules Ladies having become affiliated in 1895. David Smith wrote about the Hercules Ladies here. That article has a photograph of eighteen members in front of their new clubhouse in 1899.

Balyarrow Ladies CC became affiliated to the Royal Club in 1898 with eleven regular members, and Cambo Ladies the following year, with fourteen members.

So, by the close of the nineteenth century, Scotland had four women's curling clubs. The inclusion of Mrs Maxwell Durham in the Charles Martin Hardie painting was, I believe, an acknowledgement of the establishment of these clubs.

It is interesting to speculate on the reasons for the formation of these women's clubs. It can be argued that the men did not want to share their activity with the women. Equality on the ice was still a long way off. Even though the four women's clubs were accepted into the roster of the Royal Caledonian Curling Club, they did not, at first, compete against the men's clubs. District Medals were awarded, but these only matched up one women's club against another. One reason for that may have been the fact that the women played with different stones than did the men.

Writing in the 1898-99 Annual, an anonymous author notes, "... there is no doubt the national game has recently made great strides in popularity. The ladies have taken it up, and there are now several ladies' clubs, while a good many clubs admit ladies to membership. The weight of the curling stones for ladies' clubs varies from 25 to 33 lbs."

The author says 'a good many clubs admit ladies to membership', but is that enthusiasm backed up by hard facts? If you take the time to go through the list of clubs and members in a Royal Club Annual of the time, you can indeed find other women who were club members.

One of these clubs was Lundin and Montrave CC, and the reason that women came to prominence there, as we have seen (here), was thanks to Henrietta Gilmour, the other woman in the painting. But what other curling clubs had women members?

In the Royal Club Annual for 1900-1901, the membership of 539 Scottish clubs is recorded, as at September 15, 1900. As noted above, there were four women-only clubs: Hercules Ladies, Boghead Ladies, Balyarrow Ladies and Cambo Ladies. In addition, the Broughty Ferry CC had what appears to be a 'ladies section'. Indeed, the Dundee Evening Telegraph of December 9, 1897, records a meeting of that club where the proposal to admit lady members to the club was considered. After discussion, it was unanimously agreed that they should be admitted and eight ladies were placed on the roll of members. By 1900, this number had increased to 20.

The Balerno CC listed three 'Lady Members' as a category separate from 'Regular' and 'Occasional', as did the Raith and Abbotshall CC with thirteen.

Other clubs listed women as 'Extraordinary Members'. Callendar CC had two such, Couper-Angus and Kettins CC had three, as did Snaigow CC, and Edinchip CC had four.

Family connections were perhaps the reason some women took to the ice. Dunnikier CC listed a Miss Oswald, a Miss Mary Oswald and a Miss Lena Oswald as occasional members. John Oswald, who was likely their father, was the club's President.

Women's names appear very occasionally amongst a club's regular members. The Bowden CC has a Mrs Maxwell Tress listed thus. Her husband was the club's Vice-president. Incidentally, she was also one of the club's Patronesses. The other was a Mrs Laidlaw, who also took part in games as an occasional member of the club. These names are rare examples of Patronesses who were actually curlers themselves.

Patroness of the Penninghame CC was Mrs Lloyd Anstruther who was also a regular member of the club. Another women in that club's roster of more than 80 men was a Miss Williams. There's a story to be uncovered here, I suspect!

The above list is not intended to be exhaustive, but does illustrate that by 1900 women were on the ice in their own clubs, in their own teams, and also playing with the men, although not in large numbers. 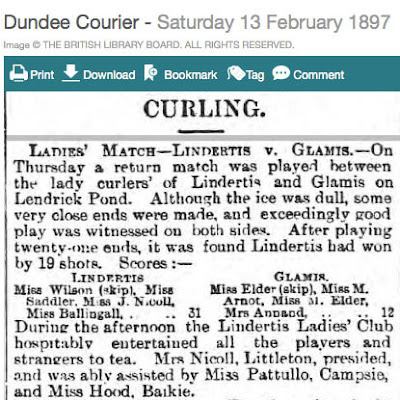 Club membership returns in old Annuals do not tell the whole story. The report, above, from the Dundee Courier of February 13, 1897, records in detail a match between two teams of women from Lindertis and Glamis. These women's names do not appear in the Annual returns of these two clubs in 1897, although the surnames do appear, most likely fathers or husbands.

Women's participation as full members of the sport's governing body faced one more hurdle. At the AGM of the Royal Caledonian Curling Club on Wednesday, July 24, 1901, in the Windsor Hotel, Glasgow, John Jackson, the President of the Glasgow Lilybank CC, proposed the following motion, "That ladies be not eligible to compete in any matches held under the auspices of the Royal Club, unless by arrangement, and against rinks composed entirely of their own sex." The motion was seconded by John Kinloch of Kilmacolm. The success of this motion would have restricted women to only playing against other women's teams in curling's great bonspiels such as the Grand Match, the International Match, and in Province Matches.

It is to the credit of James Gardner (Bathgate CC), the Rev R Menzies Fergusson (the Secretary of Airthey Castle CC), R Scott (Vice-president of Bonhill CC) and Captain R McKill (Blackburn, West Lothian, CC) who all spoke against the motion, that it was not carried. The way then was clear for women to take to the ice alongside the men, and against them, on equal terms, with the full backing of the Royal Caledonian Curling Club. That this did happen as the twentieth century progressed, in Scotland and elsewhere, we shall see in future posts.

We know very little about these women curlers whose names appear in Royal Club Annuals and newspaper reports from more than a hundred years ago. They were curling pioneers, in the male dominated society of the time. I'm wondering if any of their descendents are aware of their curling ancestors, and can provide further information?

The detail from 'Curling at Carsebreck' is from a photograph of the painting in the author's archive, and the detail from the engraving was found online here. The Boghead Ladies membership is from a Royal Caledonian Curling Club Annual, and the newspaper clipping is from the British Newspaper Archive.