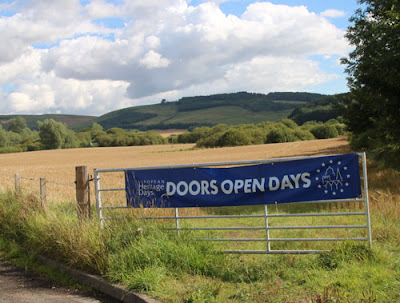 One of the opportunities at the recent Fife 'Doors Open Days' was the chance to visit the Abdie Curling Club's house, beside Lindores Loch. 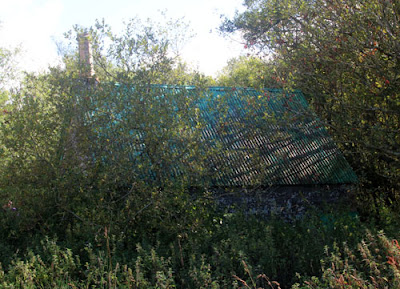 Now somewhat obscured by trees, it is a 'hidden gem'. Since 2014, it has been 'B listed' by Historic Environment Scotland and is well described on this web page.

Abdie CC's house is one of the few remaining curling club buildings. It was included in the recently published 'Scotland's Sporting Buildings', that book being reviewed by David Smith, here. 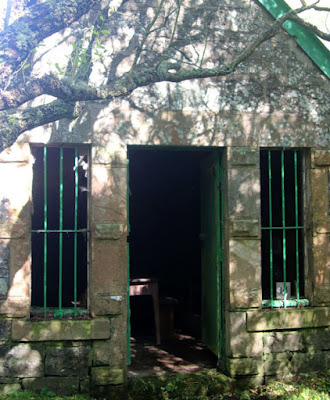 The house was constructed in the mid-1860s, on the site of a older structure. Originally it may have had a thatched roof, before that was replaced by corrugated iron.

Abdie Curling Club has a long history. It was founded in 1831, although curling was played in Abdie Parish long before that date.

The first President of the Abdie Club was Admiral Sir Frederick Lewis Maitland of Lindores. I was fascinated to learn that whilst in command of HMS Bellerophon, Captain Maitland received the surrender of Napoleon in June 1815 after Waterloo, and transported him to England. That story can be found here.

The Abdie CC was one of the original clubs listed in the first Annual of the Grand Caledonian Curling Club (as it was called then) in 1838. 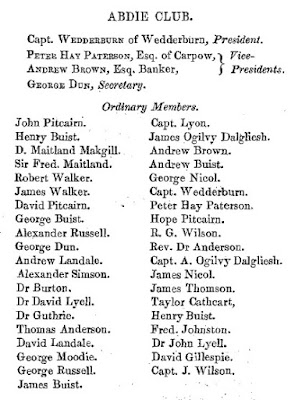 This is a list of Abdie's members in 1838. One of them, James Ogilvy Dalgleish, was elected as one of two Vice-presidents of the Grand Caledonian Club. 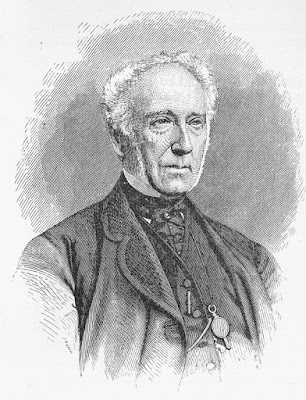 The Rev John Kerr in 'The History of Curling, and Fifty Years of the Royal Caledonian Curling Club', records James Ogilvy Dalgleish's contributions. He says, "It was, however, to James Ogilvy Dalgleish, above all others, that the Grand Club was indebted for the framework of its first constitution." That's his image above from Kerr's book. 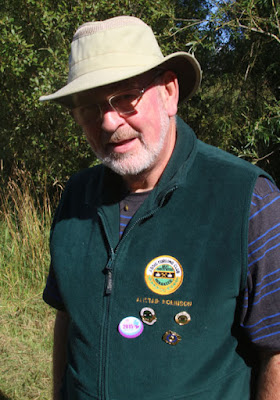 The Abdie club plays regularly these days at the Dewar's Centre in Perth. Many of its members were on duty at their old house for the Open Day. I was warmly welcomed by the current President, Alistair Robinson, above, in his club fleece. I enjoyed a welcome cup of coffee, and admired the various trophies on display. 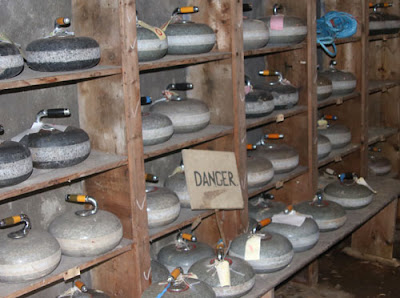 The inside of the hut has many original features. The walls are lined with open shelves for storing pairs of curling stones. It was interesting to look at these and to try to identify where they were from - mostly Ailsa Blue Hone, and Common (Green) Ailsa, but some Crawfordjohns. Some years ago the hut was broken into, and the original brass handles stolen. These were replaced with more modern chrome/plastic handles as can be seen in the photo. 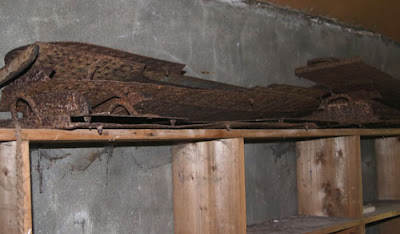 Other paraphernalia associated with the sport was all there. Here old crampits sit in a pile on a top shelf. 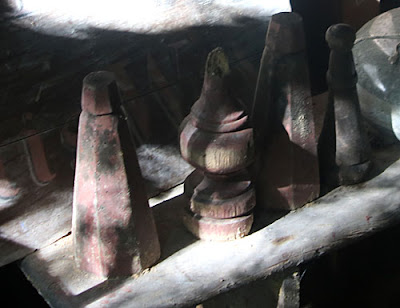 And here were four wooden tee markers, or 'dollies' (see here), wonderful, rare reminders of play on outside ice. 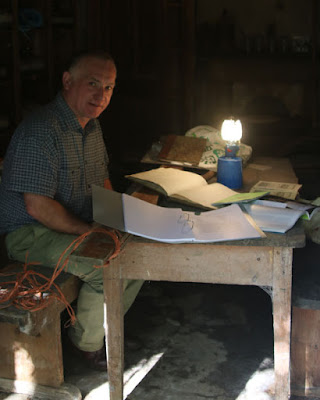 Club historian Gerry Watson had brought along the original minute books of the club, dating back to 1831. It was exciting to be able to look at these in such surroundings! 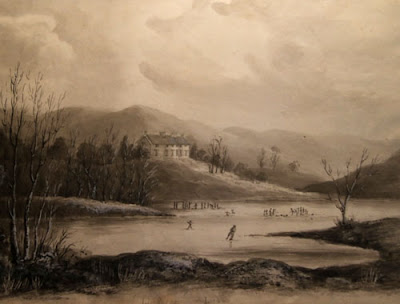 The earliest minute book contains this sketch, presented to the club by Lady Maitland, which shows curlers on Lindores Loch in front of Lindores House. What a wonderful image!

It was not uncommon for curling clubs to move from pond to pond over their years in existence. Abdie is a rare example of a club which has always had the same home ice - Lindores Loch. 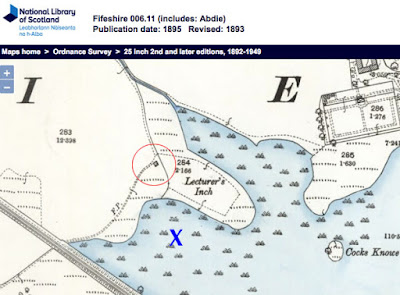 The curling house, circled in red, sits at the base of a little promontory at the west end of the loch, called 'Lecturer's Inch'.

From the markings on this 1895 map, this end of the big loch was shallow. The oldest members of the club recall curling on the area marked by the 'X'. 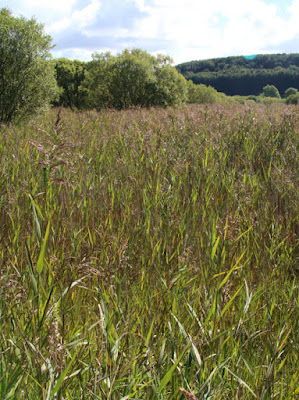 This area is now very overgrown.

A report in the Dundee Courier on December 24, 1896, noted that "Lindores Loch is now entirely covered over with ice, the frost of Tuesday having registered 12 degrees. The Abdie curling club played another friendly game yesterday in the vicinity of the Curling house. The ice was strong, but rough."

'Pond hunters' will be asking the question whether the Abdie club manipulated the area to create a natural water pond. Indeed, the Historic Environment Scotland description says, "A man-made curling pond area to the north east of the pavilion is currently overgrown with loch-side vegetation." This is in a different area to that remembered as being curled on recently. More research and survey of the site, and study of the minute books, will be necessary to resolve exactly where the members played over a hundred year period.

The wider expanse of Lindores Loch has often been used for major bonspiels. 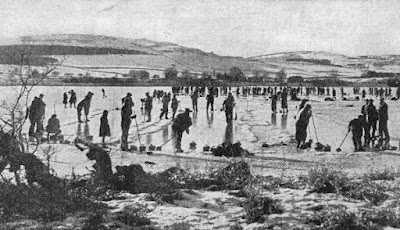 This photo is of a match between Cupar and District Province and East of Fife Province. The newspaper clipping in the Abdie club's collection of memorabilia is undated, but I have been able to find that it is from the Dundee Courier of February 4, 1952.

Thanks to Gerry Watson and Alistair Robinson, and other club members, for their warm welcome and stories about the Abdie CC. Original photos are © Bob Cowan. Lady Maitland's sketch is from the Abdie CC's minute book, and reproduced here with permission. The image of Captain Frederick Lewis Maitland was found here. It is from an engraving by Henry Mayer after Samuel Woodforde, and was the frontispiece of the 1904 edition of Frederick Lewis Maitland's 1826 book, The Surrender of Napoleon. The image of Captain James Ogilvy Dalgleish is from The History of Curling, and Fifty Years of the Royal Caledonian Curling Club, by John Kerr, David Douglas, Edinburgh, 1890. The map image is from the National Library of Scotland maps site, here.
Posted by Bob Cowan at 11:50

Another great article.
We are glad you seem to have enjoyed so much your visit to our Curling House,We were pleased with the 46 visitors we had on Sunday .
It does bring it home what a special and important little place it is, and visitors like yourself , so enthuisiastic, encourages the present members to keep the old traditions and ways of the club going.

I was along later in the afternoon so unfortunately missed you..

I took my Grandfather along to Lindores Loch to have a look at a Bonspeil. There were quite a few rinks, skaters and children being pulled around on sledges. Each rink had a food hamper with them including alcohol, to keep the curlers warm!

Can you tell me what year this was? I think it must have been in the 70’s.

Tom Calley, my Grandfather, worked on Lindores Estate through the 1930s to late 40s (I am not sure of the exact years, but while Lindores was owned by Mr Laidly). Part of his work was the maintenance of the Loch and Kail (or Kil) Burn which included maintaining the Curling Pond and Curling House and as he was a keen curler this was part of the work which he had did not mind! He continued to hold the Curling House and Eel House keys throughout the 1950s and his own stones were kept in the Curling House - perhaps even still there?

The Curling Pond was close to the Curling House, near to the Lecturer's Inch and had to be dredged clear of reeds and other water vegetation and maintained fit for regular curling by club members. Although I never visited it, it was a deep pool within the reed bed, which could be approached by rowing boat from the main Loch and by a footpath through the reeds from the Curling House when the Loch was frozen.

Bonspiels, on the other hand, were held on the deep water beyond the Island, near to Inchrye Lodge. There are several photographs in existence showing curling on that area. I recall watching a Bonspiel on that section of ice in the late 1950s.