The Bonspiel at Lochwinnoch: Fact or Fiction? 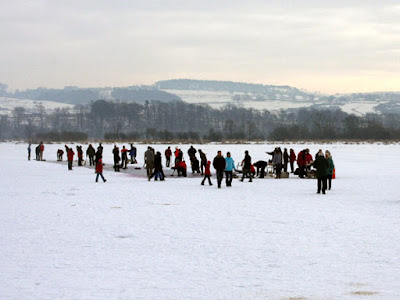 The photo above is from 2010, when I paid a visit to Lochwinnoch to see the Erskine Curling Club on outside ice on Castle Semple Loch. The loch has seen many bonspiels over the years.

The old Annuals of the Royal Caledonian Curling Club contain much information about the game as played in years past. The editor of the 1895-96 volume thought fit to reprint a rather unusual story from the Winnipeg Daily Tribune, of February 17, 1894. I've set this out below. True, or a piece of romantic fiction? You decide.

THE BONSPIEL AND BRIDAL. Reminiscences of a Great Game at Lochwinnoch in Olden Times. How a Gallant Curler Won the County Match and the Skip's Daughter.

It was the 25th of January 1892, the anniversary of the birth of the immortal Burns, that a large concourse of curlers, skaters and onlookers, met on the icy bosom of Lochwinnoch. The occasion was the annual bonspiel of the counties of Ayrshire and Renfrewshire. The excellent condition of the ice and weather brought many lovers of winter sport from adjacent towns by rail.

The contest by the chosen rinks, to uphold the honour of their counties, was the centre of attraction. The Renfrewshire rink was skipped by John Ogilvie, better known as the Laird o' Bonnyrig, his opponent being Stuart o' Langholm. For many years these two old chiels had met in friendly contest, with varying success, but, of late years, it had been in favour of Langholm. He was younger than Bonnyrig, and, at this time, had a rink who had never been beaten, and who called themselves the 'Invincibles'. So they prepared for this contest with all the assurance of success.

When everything was ready for play, word was brought to Bonnyrig that his third man, Donald Grant, the blacksmith, had fallen and hurt himself, and could not play. Bonnyrig was dumfounded. Play without Grant was sure defeat, and the old man had intended to retire from the county contests at the end of this game, and was the more anxious to win on that account, that he might retire a victor.

Langholm's men were impatient, and some not very complimentary remarks were made, which stung Bonnyrig to the quick. Just then Dr Graham took Bonnyrig aside and told him of a stranger who would take Grant's place, assuring him that he was a native of the county and a member of the C. C. club, 'and', says Graham, 'I'll guarantee that he'll fill Grant's place to your satisfaction.'

The stranger was introduced to Bonnyrig, and was found to be a likely and determined-looking young fellow. The arrangement being accepted by all parties, the play began. Langholm's rink played as if confident of easy victory, but soon found out that, if they would win, they must play for all that was in them. From the start the stranger showed a knowledge of the game superior to anything they had ever dreamed of; his cool selfpossession, his ability to play the shot that was required, and, above all, his faculty of inspiring confidence in others were such that his rink played a wonderful game.

But Langholm's men were stalwarts, and fought for every shot. Sometimes it was Bonnyrig, sometimes it was Langholm, while the excitement around was intense, and every point gained by either party, was the signal for a noisy demonstration by their supporters. The game was wearing to a close. The last end had come and the last stone at that. The stranger had invariably left the end in good shape for his skip, and now at the last end they were ties, with Bonnyrig with one stone to play.

If he could count one, the game was his. But how to get it was the question. To get it he would have to draw a port with hardly an inch to spare, wick a stone gently, and curl in. 'I'm fear'd o 't,' says the Laird. 'You can do it,' says the stranger. 'Play to that broom, tee weight, and no more. Steady!'

The calm confident tone and influence of the stranger had the desired effect on the Laird, so, with steady nerve and clear eye, he laid the stone as directed. The stranger met it at the sweeping score, and began to sweep it up, watching its every move. He swept accordingly. 'Will it make the port?' is heard on every side. It seems a little slow. And now the stranger gets in his work. His broom is moving so fast you hardly see it. The stone is following, and almost seems to gather speed. The port is reached, and passed. The stone is wick'd just right, and the Laird's stone is on the 'pat lid'. The game is won, and many a time since has the Laird's draw been spoken off as the most wonderful shot ever seen on Lochwinnoch.

And now the fun and noise began. 'Renfrewshire for ever!' Shout after shout went up from the excited crowd, echoed by the Renfrewshire hills, and faintly re-echoed by the distant Ayrshires, as if in mockery. The Laird was carried by his supporters, shoulder high, off the ice, and so would the stranger have been, but he could not be found. He had disappeared in the confusion at the end of the game.

The Laird invited a number of his friends to his house to celebrate his victory, where we will take the liberty of looking at what is going on, a little before he arrives. Out in the kitchen sits Dr Graham with a contented look on his face, enjoying his pipe, while, in the parlour, we find the stranger and the Laird's beautiful and accomplished daughter. This is her birthday, and, just five years ago, when sixteen years of age, the Laird had come home, after being defeated in the county contest by Langholm, and, finding young Gavin Davison, one of the Laird's tenants' sons, in company with his daughter, he ordered the young man off the place, and told him never to come on it again or he would set the dogs on him. Shortly afterwards the youth disappeared, and had not been heard of since. Itwas rumoured he had gone to the North-west.

The young lady did not pine and die, as some love-sick maidens are said to have done in such circumstances, but grew better and prettier than ever. The Laird got her the best education the county could give, and now, it was said, she was the most accomplished and beautiful woman in the county. Many suitors had sought her hand, but she appeared to be in no hurry to marry, and the Laird, who was a kind-hearted, just man, and especially attached to her, seemed to dread the day when she would be taken from his home to adorn that of some one else.

The Laird is heard coming, and the stranger joins the doctor, who has gone out to meet him, who is greatly pleased to see him again.

To tell of the enjoyment that night would take a long time. The Laird's hospitality was unbounded and free to all, being carried out in the good old style. Josh Strathnairn, the best fiddler in the west of Scotland, was there, and never did his old Cremona send out the reels, strathspeys, and jigs with more vim than on that night.

While the enjoyment was at its height, the Laird said to Graham, who was sitting beside him, 'I say, doctor, that 's a fine, smairt-lookin' lad, that, an' a guid curler; I ha'e forgotten his name. What is it, noo?'

'Laird,' says the doctor, 'him an' Maggie's a fine-lookin couple. Jist see how they go through that reel togither.'

'Before I tell ye his name, Laird, tak' a guid look at him, an' tell me if ever ye ha'e seen him before?'

'Did ever ye order him aff your place, an' threaten to set your dogs on him, if ever he came on't again?'

'Lord preserve me, Doctor, is that Gavin Davison ? Whaur has he been since?'

'He has been in the North-west since he went away. I've watched him ever since. He has behaved well. He has done well, and, after five years' absence, he has come back, on your daughter's birthday, to marry her. She's twenty-one to-day, Laird.'

The Laird's face turned white for a minute. At first something seemed to sting him about the heart. Then, turning slowly to Graham, he said: 'It's fate. Sae bit it be. Graham, is he worthy o' her?'

'Laird,' said Graham, 'if I was not sure that he is worthy o' her I would do all I could to prevent it.'

Graham brought them to the Laird, who, rising, took Davison's hand, saying, 'Graham has told me who you are and what you are here for. I have his assurance that you are worthy of my daughter, and I consent and ask pardon for my harshness to you five years ago, and only impose one condition, and that is, that you get married tonight when we are celebrating anyway, and that you stay here and take my place in the bonspiel.'

Davison consented, and the guests, when they found out what was going on, took a hand in, and the business was finally arranged. The Rev Mr Douglas, chaplain of the club, was sent for, and told what was expected of him.

'But the banns have not been proclaimed according to law,' said the cautious parson. 'This will do,' said Davison, pulling out a document. 'Here is a special licence.'

All preliminaries being arranged, a man worked his way through the crowd, and the burly form of Donald Grant, the blacksmith, stood before the Laird. 'Laird,' says Donald, I got masel' hurt, an' lost a guid game o' curling through this business, an' I think I should be best man.'

They were married, and the rest of the night was spent in the enjoyment usual on such occasions, and neither the Laird nor any one concerned has any reason to regret the trick played upon him to bring about the marriage of the Laird's daughter.

The Winnipeg Daily Tribune was published from 1890 to 1980. It would be interesting to know who was the author of the tale above - presumably an expat Scot who had fond memories of curling back in Scotland, and was a romantic at heart! The top photo is © Bob Cowan.

ADDED LATER: David M Sgriccia has been in touch with the answer to my question. 'Timothy Hayseed' was the pen name of WW McMillan of Treherne, Manitoba. His writings in the Manitoba Tribune began in 1890 as 'letters to the editor', but it seems he soon became a regular correspondent on matters 'curling'. McMillan himself was a keen curler. He was President of the Winnipeg Granite Club in the 1890-91 season. He was also elected an Honorary Member of the Manitoba Thistle Club and was very active in the local St Andrew's Society.

The last article by Hayseed was in 1902, according to David Sgriccia, who incidentally also has a pen name - Angus MacTavish! Many thanks to both!