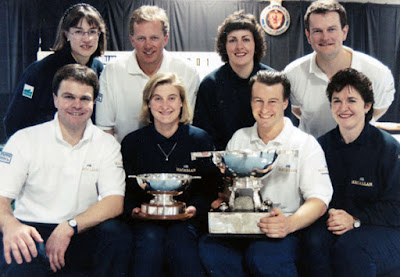 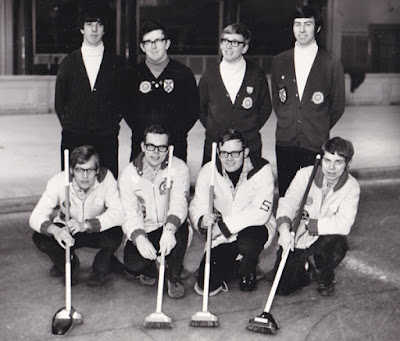 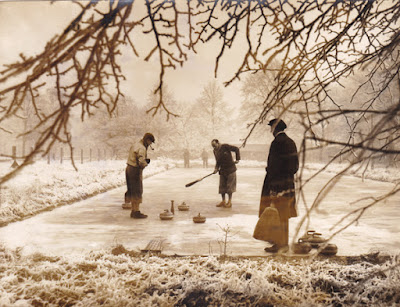 CIP-108. Members of the Royal Wimbledon Golf Club playing on their Cairnie-style outdoor rink in December 1944. The rink was beside the club house, and is now a car park. (8x6in print, Planet News Ltd, London.) 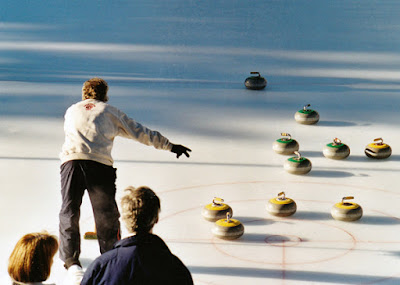 CIP-110. Lenzerheide in Eastern Switzerland. Is the skip really giving negative ice for the next shot! (6x4in print, by Erwin Sautter.) 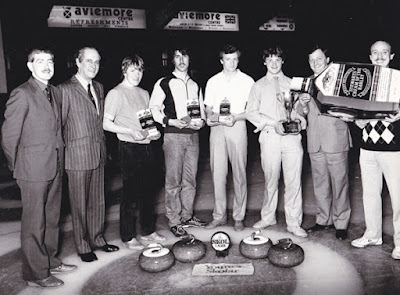 CIP-111. This is the presentation group at the Inverness and Highland Region Licensed Trade Association Curling Competition, sponsored by Stewart and Son, Dundee, and Alloa Breweries. L-R: Ian Foster (Alloa Breweries), Nigel Grant (Seafield Lodge Hotel, organiser of the competition), Brian Wilkie, David McKenzie, Chris Franks, John Gair (skip), Ian Livingston (Stewarts Cream of the Barley), Nicol Manson (President IHRLTA). I do not know the year. The Aviemore Rink was opened in 1966, and I would guess this photo might date from the early 1970s. Anyone know for sure? (10x8in print, photographer not stated.) 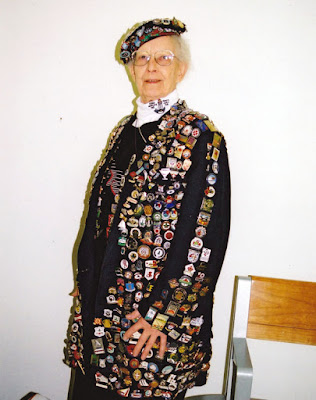 CIP-112. This from the 2000 Ford World Curling Championships at Braehead - a spectacular way to display your collection of curling pins. A name, anyone? (5x7in print, Bob Cowan.)

ADDED LATER: Lynne Stevenson has remembered this lady as Jean Dubroy, also known as the 'Pin Lady'. See this article.

All photographers are credited when they are known. Check the archive (on the right) for previous Curling Image Project posts.
Posted by Bob Cowan at 13:55

CIP111 I believe this was 1981/82 and I think that we represented George and the Seafield Lodge Hotel.