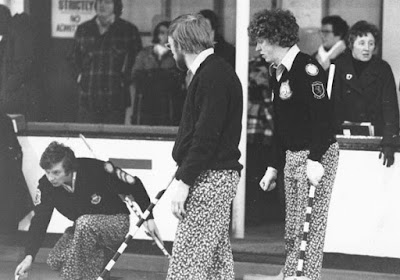 CIP-29. Graeme Adam is in the hack with Bob Cowan and Robin Copland ready to sweep. Brian Alderman would have been holding the broom at the far end. No, don't ask about the trousers. Just be grateful the pic is in black and white. That's Liz Smith behind, on the right. Probably 1978. (7x5in black and white print, photographer unknown, but likely to have been Sandy Smith.) 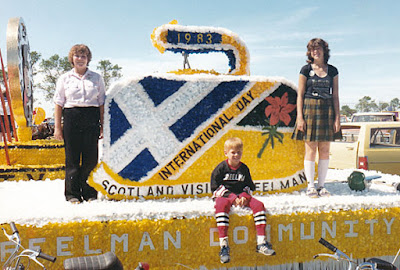 CIP-30. In 1983, the community of Creelman, Saskatchewan, was the host of Scottish visitors and the team for the Air Canada Silver Broom in Regina. A lot of friendships were made over the week. This is the Creelman float for a parade, in association with the curling event. All ten competing countries were 'adopted' by local communities. (6x4in colour print, photographer unknown.) 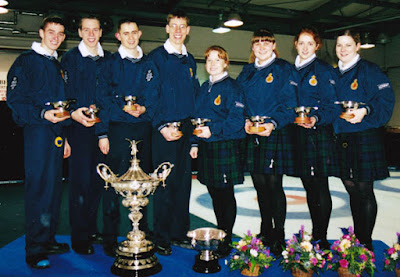 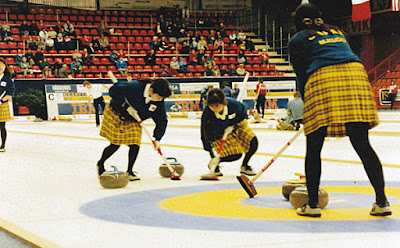 CIP-32. This is a photo of the first Japanese team to compete in a World Curling Championship - at Vasteras in Sweden, in 1990. According to the WCF historical results (here) the team members were Midori Kudoh, Kaori Tatezaki, Etsuko Ito, Mayumi Abe, and Mayumi Seguchi. Can anyone confirm who is on the ice? (6x4in colour print, by Erwin Sautter). 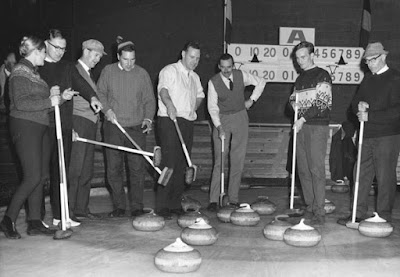 CIP-33. The caption on the back of this photo just says 'Edinburgh University v Glasgow University'. I believe it was taken at the Aviemore Rink, but when? And who can you identify? Hint - David Smith (without his beard) and Hazel Smith are in the pic. (8.5x6.5in print, Strathspey Photography.) 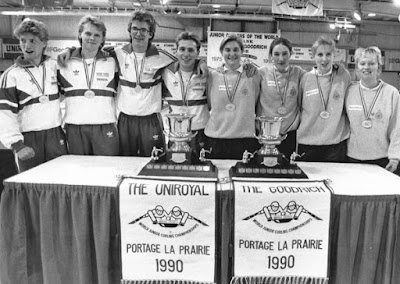 CIP-34. Here is a pic of the winners of the World Junior Championships at Portage La Prairie in 1990. (Switzerland) L-R: Roland Müggler, Markus Widmer, Andreas Östreich, Stefan Traub (skip); (Scotland) L-R: Kirsty Addison (skip), Karen Addison, Joanna Pegg, and Laura Scott. Kirsty's team were the first winners from Scotland of the women's event, in the third time that there had been a world junior women's title on offer. But this was the last year that the World Juniors were sponsored by Uniroyal and Goodrich. (8x5in print, photographer not stated, but probably Michael Burns.) 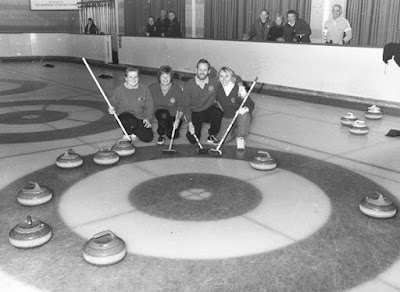 CIP-35. We haven't had an eight-ender photo yet, so here's one which was scored at the Moray Leisure Centre Ice Rink, Elgin, in the 1998-99 season. It was the first ever eight-ender to be recorded at the Elgin Rink, which had opened in 1993. (L-R) Morag Cumming, Marlyn McKenzie, Douglas Howie (skip) and Helen Downie. It was scored in the last end of the Elgin Curling Club League. Down 4-12, Howie made a double takeout with his last stone, and lay for the eight, to tie the game! The story is recorded in the February 1999 Scottish Curler magazine. (10x7in print, Hester Photography, Forres.)

Photos are as credited where the photographer is known. Check the archive (on the right) for previous Curling Image Project posts.
Posted by Bob Cowan at 08:46