Did you notice that the World Curling Federation, at its recent Annual General Assembly, voted to accept Nigeria as a provisional member? The country was described as 'the first African Member Association'. Nigeria became the sixty-first member of the World Curling family.

However, I think it is necessary to point out that, when the International Curling Federation (as the World Curling Federation used to be called) was just a youngster in the 1970s, curling was already firmly established in Africa, at Abidjan in the Ivory Coast. 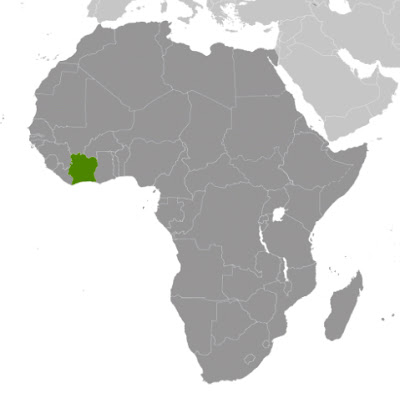 First, the geography lesson. Cote d'Ivoire (the 'Ivory Coast' in English) is in green on this map of Africa. Abidjan is on the coast of the country. Cote d'Ivoire obtained independence from France in 1960, and for a good number of years thereafter enjoyed economic and political stability. You can read all about the country here.

The Hotel Ivoire was built in 1963. According to this article, it was the first President of Cote d'Ivoire, Felix Houphouet-Boigny, who had the idea for an ice rink, for skating, in 1970.

Curling was played at the hotel ice rink from its early days. In 1973 the Abidjan curling club was accepted into the Royal Caledonian Curling Club. 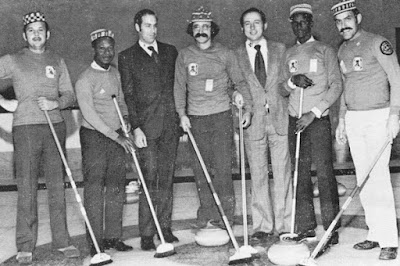 The 'First Bonspiel in Africa' was held in the rink in Abidjan in the 1972-73 season. The January 1973 issue of the Scottish Curler magazine has the following report, "An International Curling Tournament was held for the first time on the new indoor rink of the 'Ivoire Inter-Continental Hotel', Abidjan, on the Ivory Coast. Two teams from St Moritz, one from Paris, and two from Abidjan (which included several Canadians) took part in this first tournament on African soil. There were a great number of spectators, who, as a result of good publicity, were astonishingly well versed.

The interest shown in curling is so considerable that through the success of this tournament, the foundation stone for curling has been laid in Abidjan. The chief initiators were Edwin Kilcher, a member of the Curling Club Engiadina, St Moritz, an exporter who has owned a plantation on the Ivory Coast for more than thirty-five years; D Pasquier, Director of Swissair, Abidjan; Mr and Mrs Moshe Meier, and Mr Carpentier, the General Manager of the Hotel Ivoire. 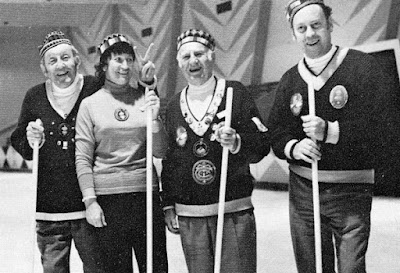 Although the first international tournament only involved five teams (mostly ex-pats and visitors), the second bonspiel in November 1973 was well supported with sixteen teams involved. Edinburgh travel agent Robert Sibbald had tried to get a Scottish team to travel to Africa, but without success. We can learn a lot about the event from an article written by Robert O Young, and American curler living in Monrovia, Liberia, at the time, as he sent the following to Robin Welsh, the Editor of the Scottish Curler. "I have never seen anything carried off so well and smoothly. There are only 26 members of the Abidjan Curling Club and they have been organised less than two years. It seems that when their large Ice Rink was installed, curling stones and brooms were also supplied. A banana planter, Ed Kilcher, a Swiss, got people interested and now they curl every Thursday evening and Saturday morning.

They have some excellent teams and have sent curlers to Canada and Europe. They will be at the big men's week-long tournament at Quebec next winter and will have some members at the 'Silver Broom' in Berne in March. Who ever goes to Quebec should look up the Abidjan team, especially Dominique Moscolo, a Canadian located here, who was Chairman of the Tournament.

Last year, they had their first bonspiel and had five entries, from Switzerland and Abidjan. This year there were 16 - ten rinks from Switzerland, one from France, four from Abidjan, and one from the USA (us). A Swiss jeweller gave the Piaget Trophy, the second prize was a large ivory tusk, and carved art was given to other prize winners. Over 60 people came from Switzerland on an 8-day excursion.

Abidjan is a beautiful city with a wonderful hotel with swimming pools. It was interesting to see curlers leaving the ice, eating bananas, and diving into a pool or lagoon.

We made many friends. I am full of enthusiasm but it is warranted. The Club is off to a good start. It seems strange to think that you are facing cold weather while we are having to stand a very hot sun!"

The winners were a team from Thun, Switzerland: Frannz Marti (skip), with Waldemar Kilcheer, Fritz Buttner and Hansrudolph Immer. Abidjan CC teams took second and fourth places in the competition.

By 1974 Curling Club Abidjan had 40 members according to the entry in the 1974-75 Annual. Unfortunately, the members are not named in this Annual, nor in any thereafter. It would be interesting to know how many of the members were ex-pats, and how many were Ivorians. The last entry for the Abidjan CC was in the 1984-85 Annual. Roger Pasquier was the club's secretary for the twelve years that the club was affiliated to the RCCC.

As well as travelling to the competitions mentioned in Robert Young's article (above), teams from Abidjan competed in the Johnnie Walker Highland Week of International Curling, at Aviemore, in 1974 and again in 1976. The Scotsman reported that, "Skip Jean Gobeil agreed that the steamy heat of equatorial Africa was a far cry from the snow and wind of the Highlands." 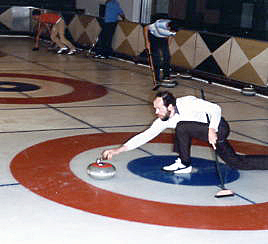 I have looked everywhere for a photo of curling at the Abidjan rink. The only one I've found so far is this from c1982. You can find the story behind it in this article.

The only Scot that I know of who curled in Abidjan was Bob Martin, from Edinburgh. There may be others! Hopefully this blog post will reach Bob and he might be able to tell us more of the Abidjan story. 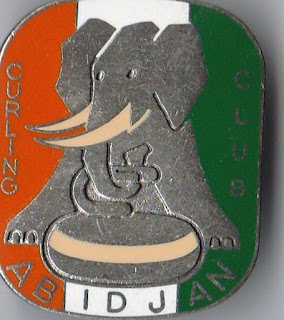 ADDED LATER. John Brown has sent this image of an Abidjan CC pin badge! Thanks John. 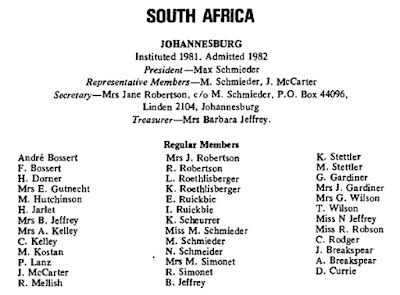 So does that cover curling in Africa? It does not. The Annual for 1982-83 has a record of a curling club in Johannesburg, South Africa, above, and this club was included in the RCCC Annual every year thereafter, until the 1995-96 issue. So, there's more African research to be done!

And in case anyone thinks I've forgotten, there is of course the 'Sub-Zero Sweepers', a spoof African curling team sponsored by Nando's. Possibly the most unusual ad campaign ever! YouTube still has this introduction, and also the clip of the cheerleaders, here. Unforgettable.