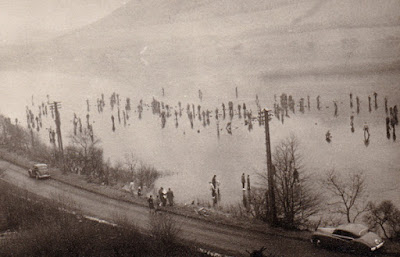 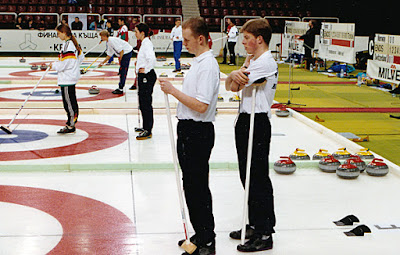 CIP-37. Here's a photo which reminds me of one of the most interesting and unusual curling events I've ever attended. It's of round robin play in the World Junior Championships in 1994 in Sofia, Bulgaria. The Scottish men's squad was Craig Wilson, Neil Murdoch, Ricky Burnett, Craig Strawhorn, and Euan Byers. The women were Gillian Howard, Kirsty Hynd, Alison Kinghorn, Sandra Hynd, and Fiona Brown. That's Craig and Ricky in the foreground. Gillian can be seen on the sheet behind. (6x4in colour print, Bob Cowan) 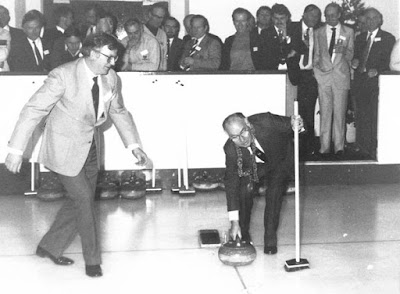 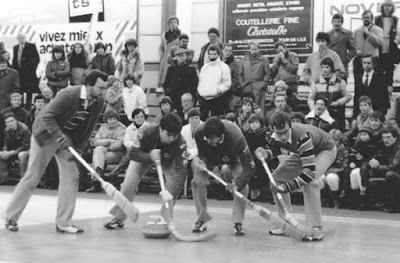 CIP-39. The Attinger team from Switzerland, in action in 1984. But where? Kurt, Werner, Bernhard and Peter Attinger were Swiss Champions in 1984 and were runners-up to Eigil Ramsfjell's Norwegian team at the Silver Broom in Duluth. (6x4in print, by Erwin Sautter) 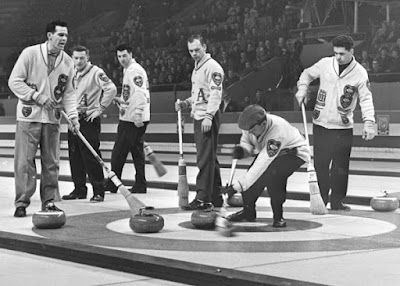 CIP-40. I think this is a wonderful photo. It shows the Ernie Richardson team in action, but where? Great to have all four of the Richardson team in the one shot. I suspected this must be a Brier Championship and think it is 1962 at Kitchener-Waterloo. Wes Richardson is on the far left, encouraging Arnie Richardson who is sweeping the stone in the house. Ernie (third left) has turned away to walk back to the other end. Sam Richardson is on the right. But who are the other two players in the picture, with the big 'As' on their jumpers? I am convinced they are two members of Hec Gervais' Alberta team - Ron Anton in the centre, and 2nd player, Ray Werner, second left. Can anyone confirm all this? Wally Ursuliak was the Alberta lead. The film of the 1962 Brier can be watched here. (8x6in print, Michael Burns Photography) 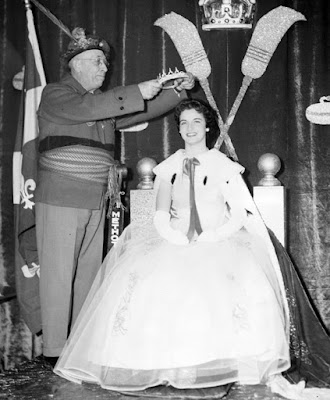 CIP-41. The crowning of the 'Queen of Curlers' (Miss Estelle Cote) at Quebec City in 1955. The occasion was the Quebec Winter Carnival, which had an international bonspiel at its centre. Here's part of an article in the February 1955 Scottish Curler. "The crowning of the Queen of Curlers took place at the Quebec Winter Club. Led by a Scottish piper, Mr J Innes, the procession entered in this order: two pages, the ladies in waiting, the Queen, Mr Weyman, Mr G MacWilliam (the Chamberlain) and Mr C Scribner (the Prime Minister). The escorts consisted of the presidents of five curling clubs. A TV camera, ten photographers and several hundred spectators watched page MacWilliam present the crown to Mr Weyman, know as Canada's Mr Curler, who crowned the Queen and gave her a sceptre in the shape of a curling broom. Page Chaput presented the Queen with a bouquet, then Mr A F Sissons, President of the Quebec International Bonspiel, pinned the international jewel on the Queen's dress. He also presented her with a pearl necklace and ear-rings - a gift from the curling fraternity." Estelle Cote was a curler, a member of the Ladies Section of the Club de Curling Jacques-Cartier of Quebec City. (8x10in print, photography by Canadian Pacific Railway) 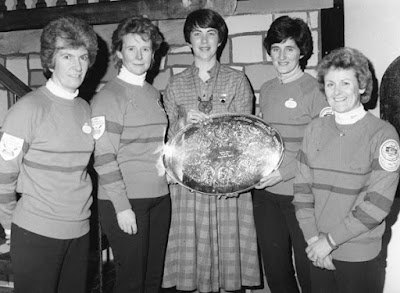 CIP-42. I have lots of photos of this team, one of the most successful rinks of women curlers in Scotland. (Or THE most successful over the years!) Here is Judy Mackenzie, Anne McDougall, Kirsty Letton (skip) and Pat Orr, with Gayle Lyburn after winning the Low Road of the Lyburn Trophy competition at Stranraer. But what year? (10x8in print, by F H McCarlie, Stranraer)

Image credits are as indicated, where the photographer is known. Check the archive (on the right) for previous Curling Image Project posts.