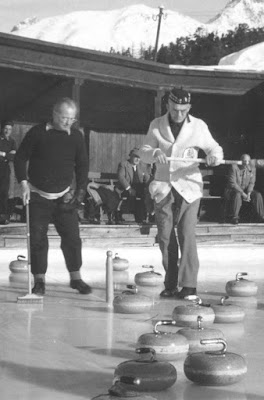 CIP-50. Outdoor curling in Switzerland. This is, I believe, the Carlton Hotel rink in St Moritz, in 1957. I do not know the names of the players in the photo. But there are lots of stones in play, and a 'dolly'! (3.5x5in print, photographer unknown.) 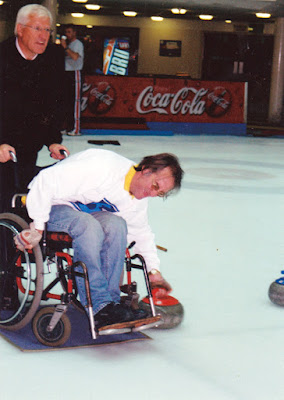 CIP-51. An early photo of wheelchair curling! It dates from 2000, and shows Jim Sellar at the East Kilbride rink. Jim was a keen bowler, took up wheelchair curling and became a founding member of the South Lanarkshire Wheelchair Curling Club. He has gone on to play for Scotland and Great Britain at World Championships and Paralympics. I picked this photo to show that there was a time when wheelchair curlers were playing without the delivery stick, the introduction of which revolutionised wheelchair curling. (5x7in print, photographer unknown.) 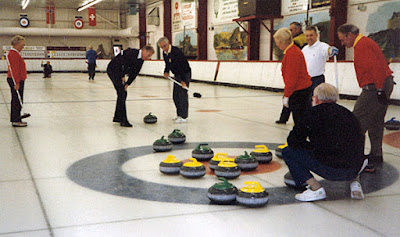 CIP-52. There are lots of stones in play in this end at the Ayr Ice Rink. Can anyone date this pic, and say who is playing? (6x4in colour print, photographer unknown.) 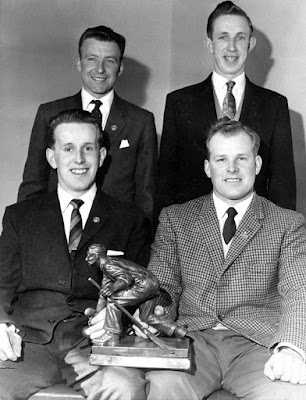 CIP-53. They would go on to represent Scotland in the years ahead, but here the Alex Torrance rink had just won the Sandy Miller trophy, an evening competition at the Scottish Ice Rink, Crossmyloof, Glasgow. The trophy was donated by Connie Miller in memory of her late husband, in 1961. Back L-R: Bobby Kirkland, Jim Waddell. Front L-R: Alex Torrance (aka 'Big Alex'), Alex F Torrance (aka 'Wee Alex'). (6x8in print, Hamilton Advertiser photo.) 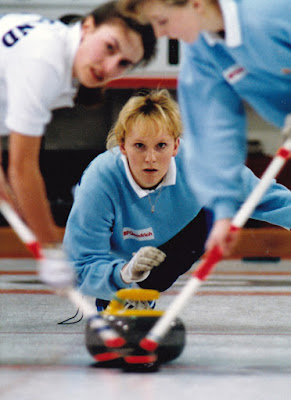 CIP-54. This is a Michael Burns photo of Laura Scott, competing in the Goodrich World Junior Women's Championship, Portage La Prairie, in 1990. Laura was the lead on Kirsty Addison's Scottish team. Karen Addison and Joanna Pegg are the sweepers. Remember, these were the days before digital cameras, so to capture such a shot as a single image on a film camera was expert work! Why was such a great photo never published? I guess it was because lead players were not considered 'newsworthy' as far as editors were concerned, photos of the skips always receiving prominence. (4.5x6.5 colour print by Michael Burns Photography.) 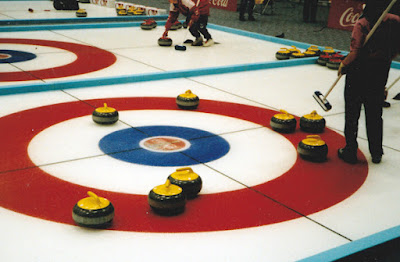 CIP-55. Another eight-end, this one from the Coca-Cola World Junior Championships in Karuizawa, Japan, in 1997. The Junior Worlds was the test event for the Olympic competition in the stadium the following year. I could see the big end developing from my spot on the press bench, and made my way to the side of the ice with my camera, and captured the shot above after the last stone of the end had been played. I had not seen many eight-ends before. The photo was never used, as I was asked (nicely) by the organisers not to use it, as they did not want any embarassment for the young team which had conceded the large end. I was happy to go along with this request, and even now I'll not give the details. Incidentally, the World Curling Federation's data on this event (here) does not have linescores, only final results, so the eight-ender is not officially recorded! (6x4in colour print, Bob Cowan.) 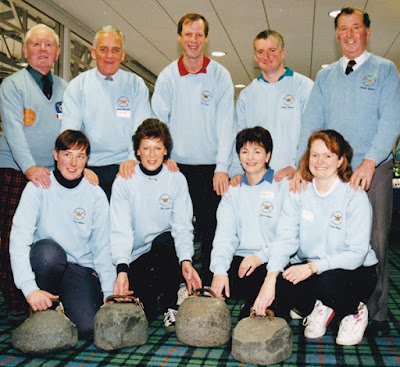 CIP-56. This photo is from the Coupar Angus and Kettins CC's 250th anniversary bonspiel in 1999 at the Central Scotland Ice Rink, Perth. When it was published in the April/May 1999 issue of the Scottish Curler magazine it was with the caption 'Sorry, no names were supplied with this picture'! Can anyone supply now? (See below.)

Note the four wonderful old 'channel stanes' which were just for 'colour' in the pic, and they were not played with in 1999. Much too valuable! They date from the seventeenth century. (6x4in colour print, photographer unknown.)

ADDED LATER: Thanks to those who contributed via Facebook, this is the lineup: Back L-R: Alex Gatt, Alistair McAskill, Rhys Stanwix, Lindsey Paterson, Alistair Lyburn. Front: L-R Anna (or Anne) Shaw, Barbara Lyburn (Added 4/12/2019. This is ALLIE Lyburn, not Barbara. Thanks to her daughter for update), Margaret (now) Stark, Trish (nee Stanwix). Please let me know if this is still not correct.

Photos are as credited where the photographer is known. Check the archive (on the right) for previous Curling Image Project posts.
Posted by Bob Cowan at 14:35