We have already described how David has researched, from a variety of sources, the various places in Scotland where curling was played (see here).

Lindsay Scotland suggested putting all this information in a more graphical form. He and David are now working on this, and need some volunteers to help with the task!

The curling places map uses the features built into Google Maps. You can see here what they have done so far here with the first 100 or so locations. When you open the map, zoom in a bit and then select one of the little blue balloons, each of which is one of the Curling Places.

This initial trial has been very successful, and the aim now is to move on to include the complete list of the locations in David’s document.

With a total of some 2500 locations to add to the map, Lindsay and David are looking for some reasonably IT-literate volunteers to help. If they could get enough help (say twenty volunteers) the task should only take a few hours of each person’s time.

The task itself is not very complex and does not need any particular IT skills. It involves using search features in Google Maps and the OS website to pin-point the locations, and then placing these onto the map. You would need to have a reasonable internet connection (broadband), a standard browser (Internet Explorer or Firefox) and the ability to open PDF files. You would also need to be comfortable copying/pasting items of text between different open windows.

If you think that you can help, then please email Lindsay Scotland here. This is a screenshot of how the curling places are highlighted on a map. On the Google Maps site you can zoom in, or out, or move around the map using the control on the top left, and locate places near where you live! 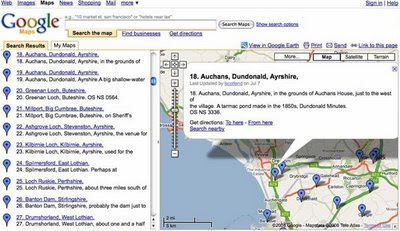 The full screen shows a scrolling list of the places on the left. If you click on a place, the information currently in David's database appears on the screen!
Posted by Bob Cowan at 12:01

Fantastic blog gentlemen. It has/will save me a great deal of effort in a book on Glasgow sports architecture I am writing as part of the larger series 'Played in Britain'.

Apologies if I have just missed the name of one site from David's brilliant list of ponds, but what is the name of the pond that appears immediately to the east of the current Hampden Park on the 1915 Lanarkshire 1:10,050?

It is commemorated by Curling Crescent in the current maps marking the inter war housing development that was developed from the 1920s, on Aikenhead's land.