The Roar of Scotland's Darling Game

Curling has given rise to lots of verse: I suppose that writing about it during the long parts of the year when playing one’s favourite game was impossible to some extent satisfied the urge to celebrate.

Many a small volume of local verses contains a poem or song in celebration of the game. Many are impermanent for they were written for specific occasions about specific curlers or games. Others, however, deserve wider circulation.

One of the most prolific poets of the twentieth century was the Rev. A Gordon Mitchell.

He was a son of the manse. After studying at Edinburgh University he was ordained to the ministry at Shapinsay in Orkney in 1896. In 1898 he transferred to Killearn and there spent the rest of his professional and curling life, as member, chaplain, and secretary of Strathendrick CC. He was also president of the Forth and Endrick Province. As his obituarist in the Annual for 1944, p. lxxxviii, writes: “His masterly translations of Latin dramas of George Buchanan were recognised by his receiving the honorary degree of D.D. from St Andrews University.” His love of curling and the Royal Club earned him the position of Chaplain from 1920 until 1939. Poems and songs by Dr Mitchell appeared in Annuals from 1900 to 1938. They range from the celebration of joysome days on the ice to formal odes of welcome to a team of touring Canadians. He wrote with equal facility in braid Scots and in perfect English. He performed his pieces at many different sorts of gatherings.

Here’s a sample of his Scots, from A Day on Drumore.

The yird’s like a brick, an’ the cranreuch is thick,
An’ the air is as keen as a gully;
The sun rises bright on Benlomond sae white.
Hae! Get haun’les and beson, my billie.
We’ll daunder awa owre the cheep-cheepin’ snaw,
For I hae a vera guid notion,
The water to-day will be ready for play,
An’ the Ailsas will soon be in motion.
Chorus.
For we’ll a’ gang a-curlin’ the day,
All nature invites to the play.
Sae we’ll soop an’ we’ll roar on the dam o’ Drumore,
For we’ll a’ gang a-curlin’ the day…
When he was re-elected Chaplain at the annual meeting in 1934 he said: “I have really very much pleasure in thanking you for your renewed confidence and for the honour which you have been so good as to bestow upon me. I assure you that some of my happiest days have been spent amongst curlers. The game appealed to me from my early years, and my affection for it and for those who follow the game has been deepened by the passing years.”

At the lunch which followed the meeting the reverend doctor recited the poem printed below to much applause. It is not difficult to see why it found favour with such a gathering of curlers for it is full of his love for, and enthusiastic enjoyment of, the game.

The Roar of Scotland’s Darling Game

In dark December’s waning light
I wandered through a woodland way:
The air was keen, the ground was white,
And filigreed was every spray.
A little loch before me lay
And from its frozen surface came,
Mingled with shouts and laughter gay,
The roar of Scotland’s darling game.

The thunder of the captains keen -
The shouting of the players tense -
‘Soop for your life -
soop clean, soop clean’ -
The bold attack, the skilled defence -
The breathless pause - the fun immense,
And, like a double-bass to frame
An orchestra’s magnificence,
The roar of Scotland’s darling game!

Like brool of lion-throated seas -
Like pibroch’s far-resounding drone -
Like sough of rocking forest trees,
Or like the rising tempest’s moan -
Like distant thunder’s dreadful tone,
Salvos that far-off gunners aim -
The rumble of the channel-stone -
The roar of Scotland’s darling game!

Some love the direful game of war -
The battle trump that stirs the blood -
The martial shock - the mortal jar -
And long to prove their fortitude,
And make their country’s quarrel good,
With all their soul athirst for fame:
Give me the spiel of brotherhood -
The roar of Scotland’s darling game!

The hunter may extol the hunt -
The fisher praise his lonely sport -
The punter may prefer his punt -
The airman may the breezes court -
Above all games of any sort
That tongue of mortal man can name,
Give me the draw - the guard - the port -
The roar of Scotland’s darling game. 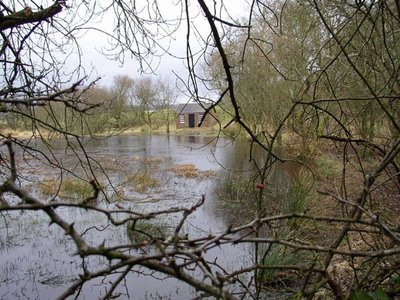 Drumore was and is the pond of Strathendrick CC. This picture shows the pond and curling house with ice that had been used a couple of days before. David's photo.
Posted by David Smith at 00:05