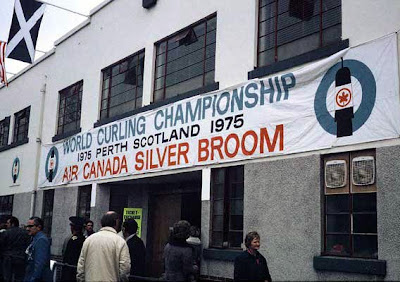 From 1968 to 1985, the World Men's Curling Championship was sponsored by Air Canada. Ten countries competed each year for the Air Canada Silver Broom.

I saw a little of 1969, but I consider the 1975 event in Perth as the first that I really appreciated, although I was just a spectator. In the days before digital cameras, I took a few shots as 35mm colour slides, and I managed to keep hold of these through the intervening years. I got these digitised recently, and I would like to share them here. They provide a glimpse of what international curling was like thirty-three years ago!

Canada, USA and Sweden finished the round robin with identical 7-2 records. Switzerland was on 6-3. Scotland (skipped by Alex F Torrance with Alex Torrance, Tom McGregor and Willie Kerr) had a record of 5-4, France and Germany and Norway went 4-5, Denmark 1-8, and Italy 0-9.

Bill Tetley's Canada were tied against Switzerland in the last end of the semifinal with two stones to come. With three Canadian shots lying against him, Swiss skip Otto Danieli played an angled-raise with his last stone to take out the Canadian stone at the front of the four foot. With the Swiss shot hidden, Tetley had to play a draw to win, but slipped through.

Many will remember the Swiss shot in the semi, but how many recall that the Swiss had beaten Canada when the two countries met in the round robin.

USA (Ed Risling, Chuck Lundgren, Gary Schnee, Dave Tellvik) beat Sweden (Ragnar Kamp, Björn Rudström, Christer Mårtensson, with Axel Kamp skipping and leading) in the other semifinal. Danieli, with Roland Schneider, Rolf Gautschi and Ueli Mulli, were always in control in the final against the Risling team. The US skip missed twice in the ninth to give the Swiss a 7-3 lead. Switzerland had won the Silver Broom.

Lots of stats about world events can be found on the World Curling Federation site here. The problem is that the information about the 1975 Broom (here) appears to be wrong! Some scores must be incorrect. Canada lost only one game in the round robin according to the WCF, and that was to France. And France did not finish the round robin with five wins as the WCF records say. Neither did Norway finish with just three wins. It goes to show that you cannot always believe what you read on the Web! I wonder if the information I've posted above is the accurate version! 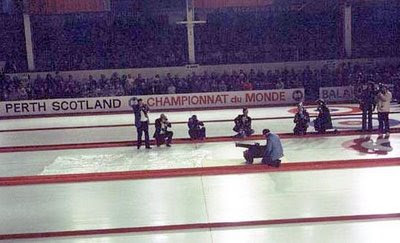 The Earl of Elgin set off his cannon to get the event under way! 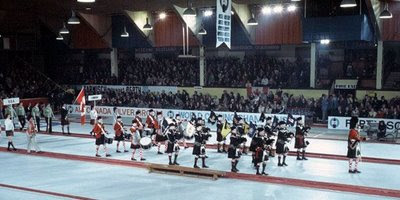 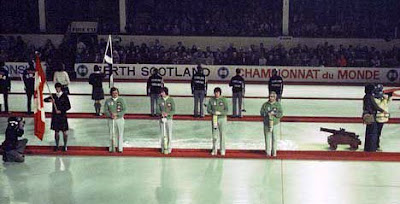 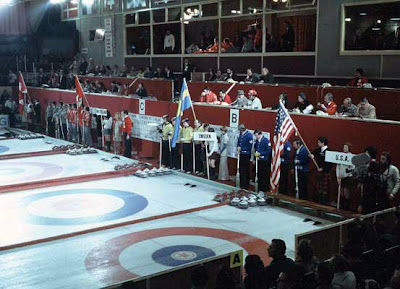 In the days before the internet, Doug Maxwell, the Executive Director, always made sure the media were looked after, and the stories from the world championships went around the world! 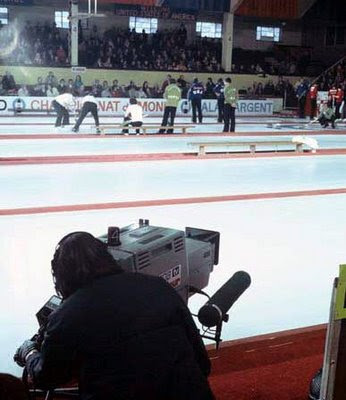 I wonder if the BBC has anything in their archives? 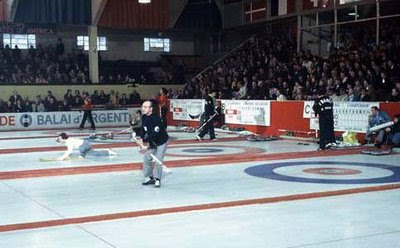 That's Scotland's Willie Kerr in the centre of the photo. 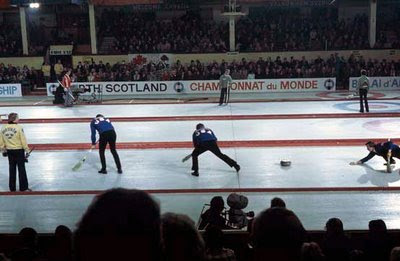 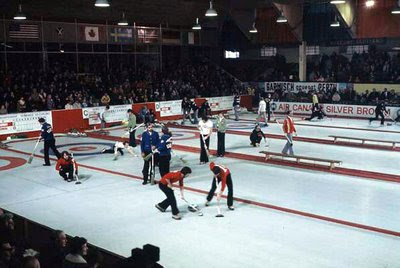 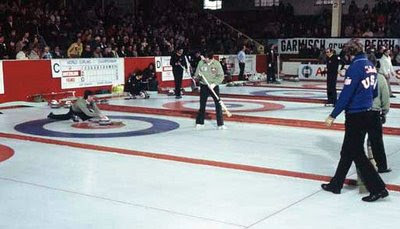 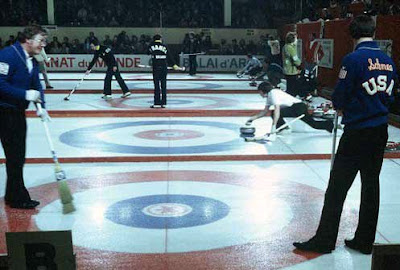 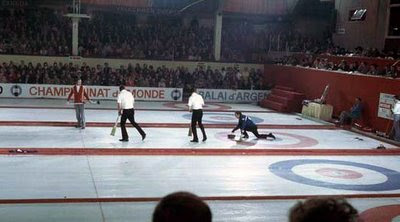 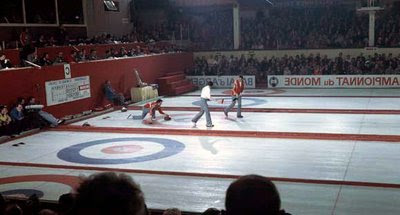 Otto Danieli of Switzerland delivers in the final. Did you notice that this transparency has been scanned from the wrong side!
All photos copyright Bob Cowan.

I think the only mistake in the WCF website is that they have included a wrong result for the France v Norway game in the round robin final table - if you check the scores you will see that it correctly shows Norway beating France, but whoever tallied the win loss records got it wrong.

Not sure I understand your comment re the record for Canada as that correctly shows Canada having a 7-2 win-loss record - unless it has been changed since you blogged?

Sorry - I see what you mean re the Canadian win loss as if you check the Canadian scores in the individual games they add up to 8 wins!!!!

Sorry - must be more careful!!

Thanks John. You see the problem.

I suspect that the Canada v Switzerland result in Round 6 is the wrong way round too.

hey y'all , i have just acquired a "silverbroom" pin and am wonder what the value of it its.
thanks mitch

These turn up on eBay occasionally. A few dollars.

Ihave in my possession a curling broom which I understand was manufactured in Norwich, Ont. at a broom factory there. I don't know how old it would be but it is made of straw with a wooden handle. It also is wrapped with a cloth material which holds the straw together. I acquired it in about 1975 and it seemed old then. Can you tell me more about it and if it's worth anything special.

I have a broom(brush) made in Scotland, that has a flask hidden in the handle.

My father is Bill Hodgson (Canada, 1975). Exciting to view these pictures!!

Does anyome know if you can still get straw brooms? I would love to get my hands on one