Where is the Silver Broom? 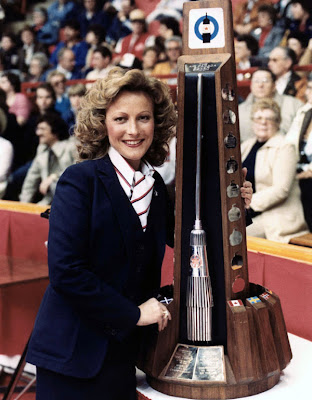 The photos of the 1975 Silver Broom at Perth, on the blog here, have stimulated a question. Does anyone know what has become of the Silver Broom trophy?

It is more than twenty years since it was last played for. Is it in an Air Canada store somewhere? Does the WCF have it? Does anyone know?

The late Doug Maxwell, the executive director of the Silver Broom for many years, was trying to find out the answer to the question before his illness, with no success.

The top photo shows Air Canada's Maridee Coulter with the trophy in 1983. The photo below shows Sigrun Cowan in Glasgow's Kelvin Hall in 1985.

Note Sigrun's shoes, with their high heels. She walked confidently and securely the length of the ice with the trophy - a tradition at the event. Now, how did she do this? Should the secret be revealed? Enough time has passed. The senior flight attendants who had to make the walk each year glued sheets of sandpaper to the soles of their shoes! It is not on record what the ice technicians thought of the practice at the time.

These were the days!

Incidentally, we do know where the Scotch Cup is. This was the trophy played for in the early years of what was to become the official World Men's Championship in 1968. The trophy, pictured below, is now presented to the winners of the Scottish Championship, see here. 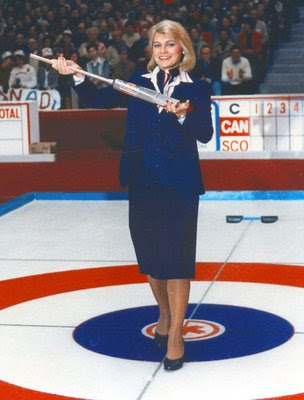 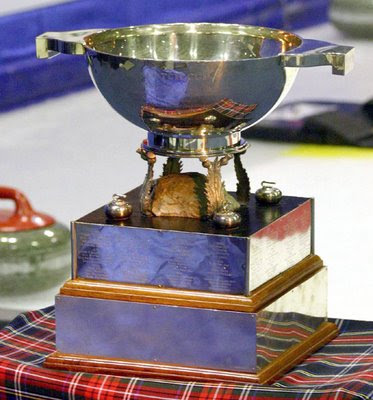 Scotch Cup photo by Bob Cowan. A new base has been added to the original trophy.
Posted by Bob Cowan at 13:45