The places where curling was played 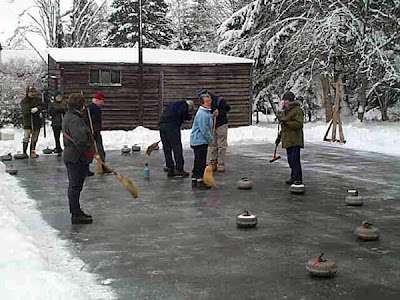 For ten years David Smith has been making a record of all the places where a game of curling has taken place. He began by going through all the Annuals of the Grand/Royal Caledonian Curling Club, from its inception in 1838 to the present day. From these volumes he noted the name of the place where any sort of game was recorded.

David also used the minute books of curling clubs as well as newspapers, and books. The comprehensive term 'places' has been used because of the variety of locations. Throughout the
recorded history of curling there is no doubt that the commonest place was the purpose-built pond. Clubs expended huge amounts of time, money and effort on the construction and maintenance of such shallow-water ponds. They also took every opportunity to play on dams and reservoirs, constructed for industrial and other purposes, when the ice there was satisfactory; and for large matches it was usual to play on natural, or man-made, lochs, and on surprisingly numerous occasions on frozen rivers, and, sometimes, canals.

The list of curling places was expanded in October 2000 and again in 2002, David studying old maps from across Scotland which show actual curling ponds.

The list was updated again in 2003 and in 2006, and now the newest version (2008) is available. It is hosted on the Royal Caledonian Curling Club website and can be downloaded here. It's a big pdf file. There are more than 2,500 places listed.

David will be pleased to receive information on curling places from curlers. He says, "If I already have it, no matter; but it may be new and important."

Many clubs keep alive the tradition of curling outside, and some continue to maintain their own 'curling places'. The top picture is of curling at Carrbridge on the club's tarmac rink in 2003. The photo is by David Robertson. More about the Carrbridge club is here.

Strathendrick Curling Club is another example. Check out photos of curling on their pond at Drumore here. Of many curling places, no trace remains, and old photographs of curling outside are quite rare. But sometimes one comes across tantalising references to curling places which are no more, such as 'Curling Pond Lane' a housing development in Longridge, West Lothian.
Posted by Bob Cowan at 08:01

I was just looking thru the list of Curling ponds etc that you have been collating over the years, very impressive. The other day I found an old map of the area where I live, Wester Elchies near Aberlour in Morayshire, and as a keen curler instantly noticed a curling pond had once been situated near to my house. I did not notice the pond on your list and thought this would be of interest to you.

keep up the good work

Hello,
Cambo CC in East Fife have a pond at Badgerhall Woods near Boarhills that given the opportunity of some decent frost they still use. (last used mid eighties i think) Our resident "historian" Ian Turnbull would be the man to speak to in regards to the history of Cambo ponds as i am sure the one mentioned above was usurped from St Andrews CC.
I must be really thick but i couldnt tally your contents page on your list with the entries - it had Boarhills pond at 63, Cambo pond at 95 & crail at 215.....couldnt find them.

G,Day David Iwonder if you are aware of the old curling pond in Milngavie along the side of the Allender river it is shown on the early maps of 1870 .There is also apaintig in the Lillie Gallery of the location.I am a native of Milngavie and enjoy researching the area and now live in Australia Kind Regards David [David Kennedy]

Hi David
Sadly, David Smith has passed away and I now maintain the Curling History blog, and I'm also involved with the Historical Curling Places project. If you zoom in to the interactive map of the Scottish 'places' you will find your pond (no 2614, Clober') and other sites around Milngavie where there is evidence for curling being played:
https://sites.google.com/site/historicalcurlingplaces/home/

I will follow up on the Lillie Gallery painting, thank you.

Hello Bob,
Came across your site and I wonder if you can help? I live in Thornton, Fife and presently writing a book on the history of my home village. Thornton outdoor Curling Club was founded in 1865 and continued until the early 1950s. In my youth (I'm 70) the clubhouse had been destroyed and only the concrete rink remained - now it is vastly overgrown and almost hidden from view. I was wondering if you had any history on the club or indeed photographs?