Who first pebbled the ice?

The first reference to pebbled ice that I have come across is the passage in the Rev. John Kerr’s wonderful book, Curling in Canada and the United States, where he, at page 344-9, tells his readers about preparation of Ice for Curling in Canada.

It is important to remember that in 1902-3, the date when John Kerr was captain of the first Scots team to tour and play in Canada, that although the major part of curling was done in covered rinks, that is, within buildings, it was still natural frost which froze them. The buildings were there to protect the curlers and the ice from the weather. The long and severe winters of Canada meant that the expenditure involved in going indoors was worthwhile.

When the ice had been flooded two or three times to get a level rink - a luxury that Scotland did not often afford – the ice was 'pebbled'. Kerr explains, "Strange as it may seem to the uninitiated, in this final process hot water is used; and when the mercury indicates a near approach to zero the water may be almost at boiling point, the objective being that the heated water may melt a seat for itself in the ice-sheet before freezing, and so not scale off under the action of a moving curling stone; …"

Dr Kirk, one of the team members, in the course of his impressions of curling in Canada, writes at page 549, "The surface of the ice is either sprinkled or corrugated. In the former case a watering can with a very fine rose is used, and hot water is sprinkled sparingly over the whole surface. This, of course, makes no pattern on the ice. In the latter, small streams of water issue from a pipe about 5 feet long, with pinhead apertures an inch apart, the pipe being fed from a tank attached to it containing hot water. This is rapidly run diagonally across the ice first from one side and then across so as to make a diamond pattern. This gives a certain texture to the ice surface, so that the stone answers more readily to the turn of the hand than it possibly can do on perfectly smooth ice."

Pebbling could only have evolved in Canada. The very idea of putting liquid water - and hot water at that - onto the longed for open air ice in Scotland would have seemed like ridiculous vandalism. 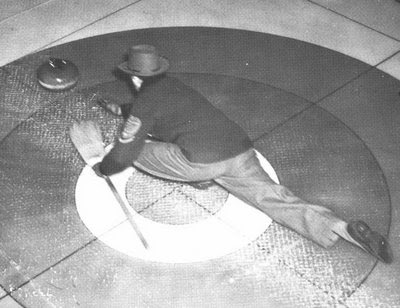 This photo of Ken Watson, in 1936, clearly shows that the diamond pebble was still in use at that time. The photo is from the Brier (the Canadian Championship), held at the Toronto Granite Club, and is from Doug Maxwell's book, the First Fifty: A Nostalgic Look at the Brier, Maxcurl Publications, Toronto, 1980. Maxwell describes how the pebble was made and says, "The ridged pebble thus produced was used for the entire week. There was no re-pebbling as in today's game. The ice would become progressively swingier as the week ran down to the final days."
Posted by David Smith at 20:37