From Scotland to the USA

It is said often that it was the Scots who took the sport of curling to North America, but very rarely do actual names come to light.

My attention was grabbed some time ago when, thanks to the British Newspaper Archive, I came across a short article in the Dumfries and Galloway Standard of Wednesday, April 29, 1857. This was titled 'THE CHANNEL-STONE IN NORTH AMERICA - EXTENSION OF CURLING'.

Here's the article in full. "A number of the miners who left the villages of Wanlockhead and Leadhills two or three years since, having located themselves the banks of the classic Susquehanna, at a place named Pittston, in the county of Luzerne, North America, have shouldered broom during the last winter, and formed themselves into a curling society. The club numbers eighteen, who mean to adopt the rules and regulations the Caledonian Curling Society; and that they may the more easily carry out their intentions, they elected the following office-bearers, namely, John Williamson, president, Mr William Reid, secretary, William Williamson, treasurer. The members committee are - Messrs James Moffat, James Watson, John M'Kenderick, John Williamson, junior, and William Slimmon.

Mr Williamson was thirty years cashier (of) the Wanlockhead club, and by his untiring exertions contributed greatly to promote its prosperity. The juniors of the Pittston club are all good and keen curlers, partly reared under the tuition of Williamson, and have taken early opportunity of shewing their attachment to Scotia's national and manly game by attempting to establish it in the land of their adoption.

The club have ordered a very handsome medal from Mr Muirhead, Glasgow, and have likewise sent to Watson, who was twenty-seven years president of the Wanlockhead club, a photographic representation of a band of curlers, fully equipped, and also a massive gold pen and pencil-case, with a suitable inscription, as a mark of their friendship, and a memorial of the many happy days spent on the 'crystal field' in their native glen, and the joyous meetings which occasionally took place among the merry and warm-hearted band after the contest.

The Pittston club played their first game on the 30th January last. The spiel excited much curiosity among the inhabitants of the district, and a considerable crowd assembled to witness their sport; and therefore they expect next season to double their numbers."

I concentrated initially on John Williamson, and his son of the same name. Williamson snr had been a member of the Wanlockhead curling club for many years, and the club's treasurer since 1821. The old minute books of the curling club, which survive in the Miners' Library at the Wanlockhead Lead Mining Museum, confirm that.

John Williamson and his son were still living in Wanlockhead at the 1851 census. In 1851 John snr, a widower, was 58 and his son was 21, and that of course tells us how old they were when the Pittston curling club began in 1857 - John was 64, and John junior 27. They are both listed as lead miners in the 1851 census. They had a house servant (Helen Porter, age 21) living with them in 1851. Ten years previously, there had been a wife, Jane (if I have deciphered the writing correctly) of the same age as her husband, given as 45, and two other children, James (15) and William (14), as well as John (11). Note there is a discrepancy in John snr's age in the records. He is 45 in 1841, and 58 in 1851. One can easily understand how this might have happened, but if one takes the earlier age as the correct one, it means that he was just 61, not 64, when the Pittston CC was formed. Still, I think it was extremely courageous for John snr to leave Wanlockhead in his late 50s (say) to start a new life in the USA.

There would have been two reasons for leaving Wanlockhead in the 1850s. One would have been economic. The viability of the lead mines in the area would have been a consideration. And with the loss of his wife one can understand the Williamsons taking the opportunity to emigrate to North America to start a new life. Note that one of the children is called William, and there is indeed a William Williamson mentioned as a member of the newly formed Pittston CC. It is possible that these are one and the same person. Perhaps William had moved out of the family home by the time of the 1851 census.

I would love to find out what happened to father and son after 1857. I've failed to confirm what happened to the rest of the family, either before or after they emigrated. Death records were not compulsory here before 1855. However, the Pittston Curling Club was still active in 1860. A letter to the Editor of the New York Times on January 9, 1860, records 'the result of that long-pending match between the Pittston (Penn) Curling Club and the New-York Caledonian Curling Club, of New-York. The game came off at Pittston, on Friday, Jan 6, with 12 players on each side'. John Williamson snr and John Williamson jnr were the skips of two of the Pittston teams. Overall, the New York club were the winners. 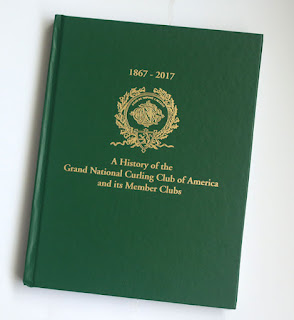 I have recently added a wonderful book to my curling library, 'A History of the Grand National Curling Club of America and its Member Clubs: 1867 - 2017', assembled by Gwen Krailo-Lyons, the GNCC President in 2007-2009 and 2016-2018. The Grand National Curling Club is the oldest national governing body for curling in North America. Pittston Curling Club was one of the eighteen curling clubs belonging to the GNCC in its first season, and so we can assume that the Pittston curlers had weathered the Civil War (1861-1865), and were among the founding member clubs when the GNCC was formed shortly after the war ended.

After a break of many years, local enthusiasts founded the Scranton Curling Club in 2006, curling on ice at a skating rink in Pittston. The club moved to Wilkes-Barre when that town renovated their ice rink, and changed its name to the Anthracite Curling Club. The club rightly traces its legacy to the Wanlockhead curlers who emigrated to Pennsylvania in the 1850s. 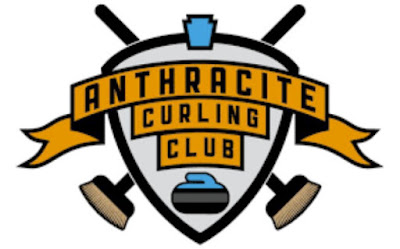 It's all an interesting story, but I'm very much aware that it is incomplete. This is why I've not written about this before now. I have not found any record of how and exactly when the Williamsons travelled to Pittston. Or how they would have learned about coal mining opportunities there.

I've wondered if the medal ordered from Mr Muirhead, Glasgow, has survived. And what happened to the photo of the curlers, and the 'massive' gold pen and pencil-case, referred to in the newspaper article?

Did father and son have a successful life in Pittston?

I've also had limited success in trying to find the background of the other Scots mentioned in the newspaper article (William Reid, William Williamson, James Moffat, James Watson, John M'Kenderick, and William Slimmon). What did these six curlers do before they got to Pittston, and how did their lives pan out thereafter? There's a whole book to be written here. A huge amount of research would have to be done first, and I've probably left it too late to start. Perhaps local genealogists in the Wanlockhead/Leadhills area in Scotland, or in Pennsylvania, might well have information to hand. Can anyone in the USA trace their ancestry to Scottish miners who came over to work the coal mines of Pittston in the 1850s? If so, do get in touch.

There's one other reference to curling in Pittston that I've discovered recently in a local Scottish newspaper. In The Hamilton Advertiser of January 27, 1872, in a section called 'American Notes' the following appears. "Curling is becoming more common as Scotchmen are getting closer together. Mr Wiseman, watchmaker here, had an order last season for twelve pairs of curling stones and handles for the County of Lucerne, Pennsylvania. A society had been formed there called the Pittston Mutual Curling Club. President, Thomas Waddell; vice-president, Henry Smith; secretary, Walter Whinton; treasurer, William Wallace. The stones were sent off in the end November last." This may be a missing link in the evolution of the curling clubs in Pennsylvania, or it may refer to the original Pittston club having changed its name after a few years of membership of the Grand National, becoming, for whatever reason, the Pittston 'Mutual'. And here are yet more names to research!

Thanks to Gwen Krailo-Lyons. The British Newspaper Archive continues to be an immense reservoir of curling's history.
Posted by Bob Cowan at 10:59