I have been amassing photographs of curling for many years. Many date from before the days of digital cameras and smart phones, and have never been digitised, nor posted online. Most never will be. But I did decide over the summer that it would be interesting to share some of them, and so the 'Curling Image Project' has been born.

My plan is to post a photo each day on Twitter, and then gather these together every week or so here on the Curling History site. The first photo went out on September 1 on @CurlingHistory. Below are the first seven photos that have gone up.

Why do this? Well, on a selfish note, it keeps my old brain active! Important these days. And I do like a good wallow in nostalgia. It is also a project to remind the (young) curlers of today, and those new to curling, that the sport has an interesting history! I also hope that it might engage others who have an interest in curling's history. Not all the photos were taken by me, and I will try to make sure that the original photographer is credited in each case. In some cases there will be photos with no indication of who is in the picture, or where it was taken. That's when you may be able to help.

The project needed a name, and I decided to call it the 'Curling Image Project' - at least that sounded more grand than 'odd photos from Bob's collection'!

Thanks to Jayne Stirling, one time correspondent for the Scottish Curler magazine, and 2017 Scottish Mixed Doubles champion, who gave me the idea for a 'photo of the day' from her own Facebook account a whiles ago.

Comments are welcomed, but these are monitored, and may not appear immediately below. Or you can email me (address on the right) if you wish to add any information on an individual photograph. 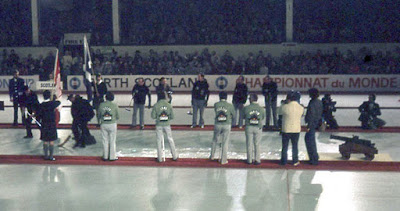 CIP-1. The Jubilee Stone is swept down the ice during the opening ceremony of the 1975 Silver Broom World Curling Championship at the Central Scotland Ice Rink, Perth, Scotland. Note Bill Tetley's Canadian team in green nearest the camera. They did move before the cannon was fired! (From a 35mm transparency, Bob Cowan) 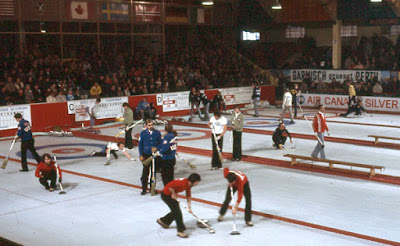 CIP-2. Round robin play at the 1975 Silver Broom. How many players can you identify? You can check the WCF Historical Records for ALL the participants' names, here. (From a 35mm transparency, Bob Cowan) 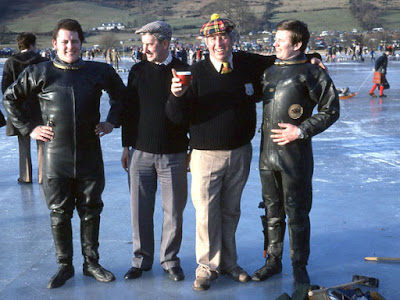 CIP-3. "Save me first!" Two participants in the 1979 Grand Match on the Lake of Menteith with the two on duty divers/frogmen, should the worst happen! Names, anyone? (From a 35mm transparency, Bob Cowan) 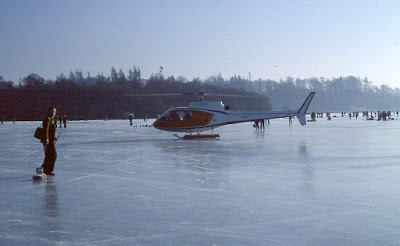 CIP-4. This helicopter on the ice at the Lake of Menteith had brought the Royal Club President, Captain Jack Anderson, to the 1979 Grand Match. (From a 35mm transparency, Bob Cowan) 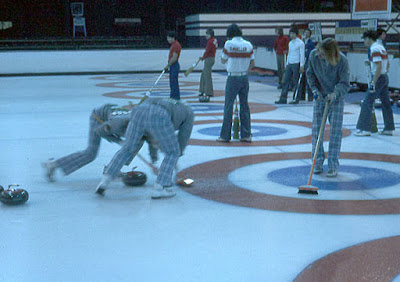 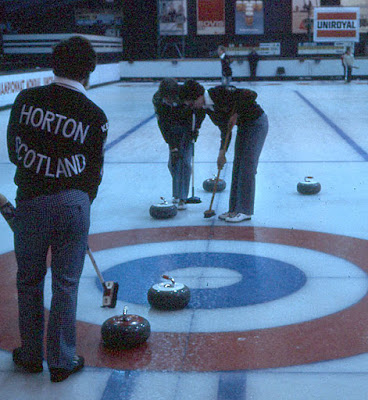 CIP-6. The Scotland team in action at the 1976 Uniroyal World Junior Curling Championship at Aviemore. Ken Horton is in the head for his skip's (Bob Kelly's) stone. Keith Douglas and Willie Jamieson are the sweepers. (From a 35mm transparency, Bob Cowan) 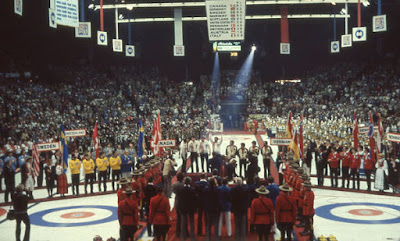 CIP-7. Ed Werenich, the skip of the winning Canadian side, holds the Silver Broom aloft at the closing ceremony of the 1983 Air Canada Silver Broom World Curling Championship in Regina. The Canadians (Werenich, Paul Savage, John Kawaja, and Neil Harrison) beat Keith Wendorf, Hans Dieter Kiesel, Sven Saile and Heiner Martin in the final. (From a 35mm transparency, taken, if I recall correctly, by a colleague on the press bench with my camera.)

Photo sources are as indicated. Slides (35mm transparencies) were popular from the 1960s to the mid-1990s. They were a cheap and easy way to make images which could be projected on a screen with a slide projector. The above seven slides are just a sample of several boxes of them I have kept. Scanning them all these years later gives results of varying quality, as you can see.
Posted by Bob Cowan at 09:47