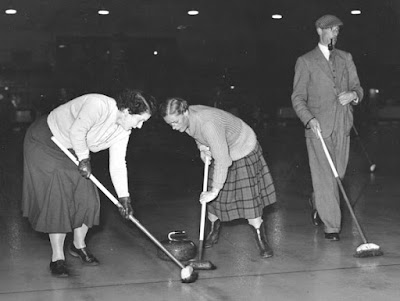 CIP-8. One of my favourite photographs! It dates from 1956 and shows action from the opening day of the new season at the Central Scotland Ice Rink, Perth. The women curlers may be from the Strathallan curling club. Names, anyone? There's no indication just who the gentleman on the adjacent sheet is! (21x16 cm black and white print, credited to Star Photos, Perth.) 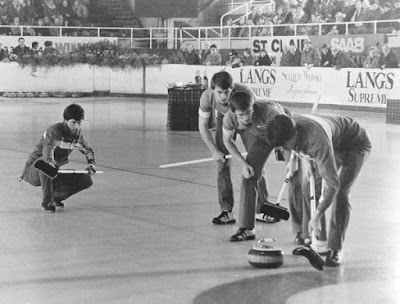 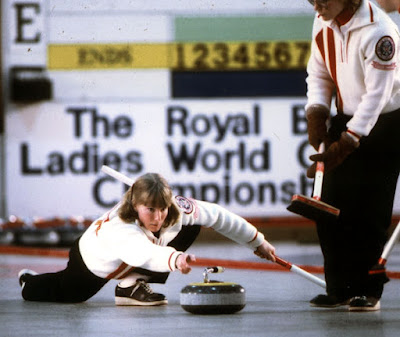 CIP-10. Back in the days before I had found out just how difficult it was to take good action pix of curlers and curling myself, I knew this was the standard to which I should aspire! It was taken by the late Rod McLeod. It is of Canada's Connie Laliberte on her way to winning the Royal Bank Ladies World Curling Championship at Perth in 1984. Connie's team was Chris More (3rd), Corinne Peters (2nd), and Janet Arnott (lead). (From a 35mm transparency, Rod McLeod) 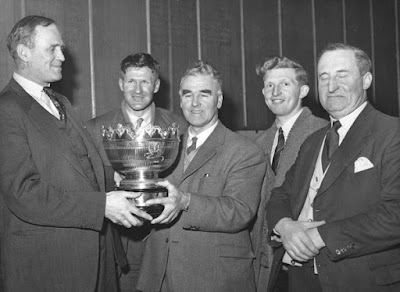 CIP-11. Has anyone a suggestion what the trophy might be, and who has won it? Who is making the presentation? (22x16.4 cm black and white print, credited to 'Falkirk Herald Studio', so perhaps a club that used to play at the Falkirk Rink?)

ADDED LATER. (Thanks to John Brown) Since posting this pic, I've since discovered it was published in the Scottish Curler magazine in March 1957. Sir John Muir is presenting the 'Queen's Trophy' to Falkirk's A C Carroll, with his team of J Dunn, D Adamson and G S Adamson.This trophy was the 'consolation event' for the British Open at Falkirk Ice Rink. Teams which lost in the first round of the main competition were eligible to play for the Queen's Trophy. 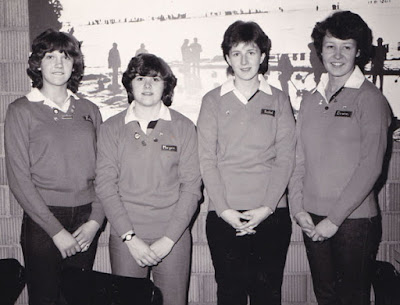 CIP-12. One of many 'when we were young' photos I have to show. The pic is of four 'Lanarkshire Ice Rink Juniors', (L-R) Jackie Steele, Margaret Craig, Isobel Torrance and Christine Allison (skip). The team finished ninth at the Wallisellen International Tournament in Switzerland on October 10-11, 1981. What interesting and successful curling lives these four women have had since then! (The 14.7x10.5 cm print is one of many by the later Erwin Sautter of Zumikon who was a great supporter of Scottish Curling, and the sport in general.) 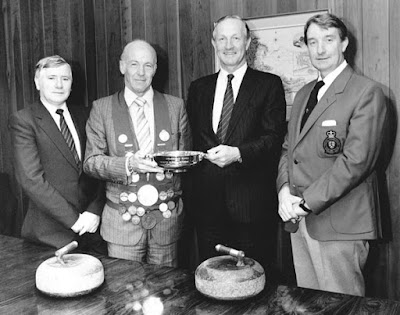 CIP-13. "Medals must be worn!" I need help in identifying this one. It's a beautiful quaich, and there are lovely single soled stones on the table. But just look at the badges/medals on the curler second from left! No date. Names, anyone? (25x20 cm black and white print, credited to Mitchell and Averell Photographers of Dumbarton, so could it be of Dumbarton CC curlers?)

ADDED LATER: Liz and John Paul thought the person on the right might be the late Jim Hutton. Liz followed this up and writes, "Thanks to Bill and Corona Marshall, here’s the info required....1985 Presentation to Dumbarton CC of the Strathleven Quaich. L-R: Director of Strathleven Bond, Willie Wilkie, President DCC, Gordon Kilgour MD Strathleven Bond, Jim Hutton Secretary DCC." 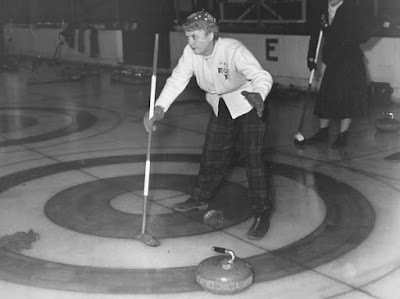 CIP-14. Mrs Ada Wilson, described as the 'tartan-trewed skip', on the ice at the Central Scotland Ice Rink, Perth, in the 1950s. Don't know exactly when. Note the duster on the ice at the front of the house! (21x16 cm black and white print, credited to Star Photos, Perth)

Sources of all images are as stated. More about the Curling Image Project here.
Posted by Bob Cowan at 10:58