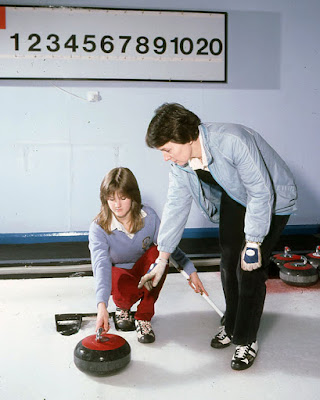 CIP-22. National coach Jane Sanderson at work in the 1980s. She was an inspiration to many of us, and, I feel, has never received the recognition she deserves for her contribution to the sport in Scotland over the years. (35mm transparency, photographer not known.) 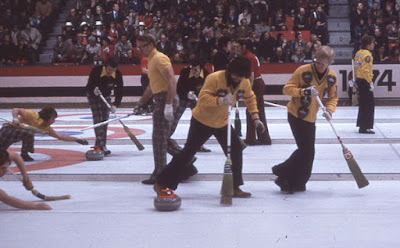 CIP-23. Attending the Macdonald Brier Championship in London, Ontario, 1974, was one of the greatest curling experiences of my life. That's the BC team nearest the lens, with Bernie Sparkes (on the right) getting ready to sweep. The team was Jim Armstrong (skip), Bernie (3rd), Gerry Peckham (2nd) and Clark Winterton (lead). What dates this pic is Bernie's flares! (From a 35mm transparency, Bob Cowan) 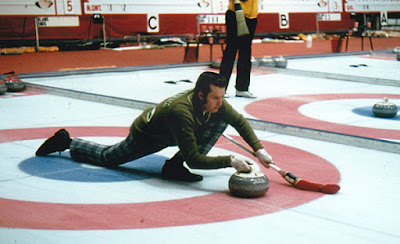 CIP-24. This is Larry McGrath, the skip of the Saskatchewan team which finished as runners-up at the 1974 Macdonald Brier. Note that he's sliding with a synthetic broom known as a Rink Rat. In 1974 the eleven competing teams just played a round robin, no semis or page playoffs. 1974 was significant too, in that it was the last year that you had to stop any part of your body going over the hog during delivery, see here. (From a 35mm transparency, Bob Cowan) 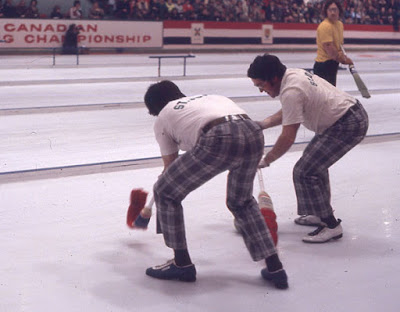 CIP-25. Three St John brothers (Ron, Wayne and Rod) made up the rest of Larry McGrath's Saskatchewan team at the 1974 Brier in London. They were the loudest team on the ice when they got to work with their rink rats! The promotional film of the 1974 is online and available to watch thanks to Curling Canada, here. You can see the players in delivery trying to stop going over the hog! And can you spot me in the stands? (From a 35mm transparency, Bob Cowan) 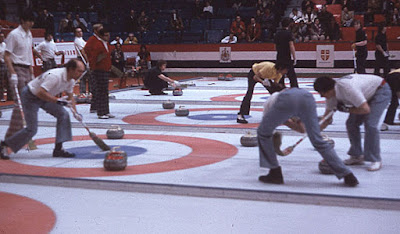 CIP-26. It's a bit blurry, but so are my memories of an amazing week. Here is Ron Anton (in the head) encouraging the Alberta front end on their skip Hec Gervais' stone. Warren Hansen was 2nd and Darrel Sutton lead, and the team won the event. (Hansen is on the right. From a 35mm transparency, Bob Cowan) 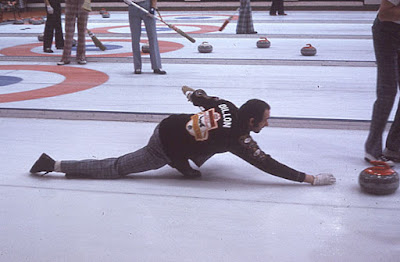 CIP-27. I enjoyed watching the Prince Edward Island team, and not just because their skip had a distinctive name on his back. Bob Dillon skipped John Fortier, Jerry Muzinka and Merrill Wiggington. They finished with a 3-7 win-loss record. (From a 35mm transparency, Bob Cowan) (And if you need reminded about the other Bob Dillon's curling song, go here.) 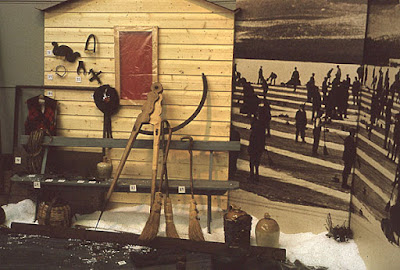 CIP-28. Part of the curling history exhibition 'Scottish Curling Through The Ages' which ran in the Perth Museum, in conjunction with the 1975 Air Canada Silver Broom World Curling Championship. The large dividers were a measuring implement, NOT for scoring the rings, as some have postulated. These are now at the Fife Folk Museum in Ceres. (From a 35mm transparency, Bob Cowan)

Origin of the photos are as indicated. Previous Curling Image Project posts can be found in the archive, on the right.
Posted by Bob Cowan at 10:50