How Scotland Fared at the Commonwealth Winter Games 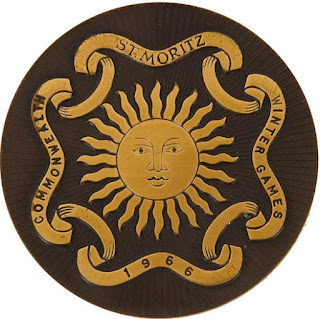 Was there really a Commonwealth Winter Games? When I noticed the badge above on Google Images I went searching. There was indeed a series of such competitions, in 1958, 1962, 1966, and 1970, according to Wikipedia (see here), and this informative blog article, from where the image above originates.

The Commonwealth Winter Games were the brainchild of Thomas Dow Richardson (usually known as 'Tyke' Richardson), a keen figure skater, who represented GB in the 1924 Olympic Winter Games, and wrote several books about his sport. He was eventually to receive an OBE for services to skating.


The Games were never officially sanctioned. Karl Magee, Archivist at the University of Stirling Library (which holds the Commonwealth Games Scotland archive, see here) has been extremely helpful in providing information. Richardson's efforts certainly came to the attention of the Commonwealth Games organisers. Karl notes that the Minutes of the Meeting of the British Empire and Commonwealth Games Federation in General Assembly at Melbourne University, December 2, 1956, indicate that a 'Winter Games', had been discussed: "Lord Aberdare (Wales) stated that enthusiasts from many countries within the Commonwealth and Empire had approached him regarding the staging of a series of British Empire and Commonwealth Winter Games." After discussion, it seems that the issue was not progressed, "The matter, therefore, was left in abeyance unless the project was raised officially on a future occasion by one of the constituent members of the Federation."

After the first Winter Games had taken place in 1958, the minutes of a meeting of General Council, British Empire and Commonwealth Games Council for Scotland, in Edinburgh, February 23, 1959, has the following, "Winter Games: The Secretary reported he had attended a meeting of the Federation Advisory Committee in London to discuss the proposal to hold Winter Games under the patronage of the Federation. The scheme outlined by Mr T D Richardson envisaged the Federation taking over the administration, but a separate committee from the Winter Sports bodies themselves would do all the organising. Competitors or their Associations would be expected to finance their own travel and subsistence, but National Games Councils would be asked to approve and sign their entries.

As all the Winter Games bodies did not appear enthusiastic about the scheme, it was agreed to circularise them all to ascertain:
Whether they were in favour of the concept of future Commonwealth Winter Games being held on the lines detailed, and
Whether, if they were in favour, they would be prepared to assist in the financing and organising of them, as the Federation would not be involved in either of these."

It would seem that there was little support for this scheme, as the Minutes of a meeting of the Advisory Committee of the British Empire and Commonwealth Games Federation, held in London, on March 28, 1961, had the following, "Commonwealth Winter Games. The Chairman reported that further unofficial ‘Commonwealth Winter Games’ would be staged in St Moritz in January 1962. These Games were not recognised by the Federation or by its affiliated BE and CG Associations. All attempts to find a firm basis of finance and administration for these Games had hitherto failed, but the door was not closed. It was hoped to have an ‘observer’ from the Federation during the period of the Games."

The lack of official support for the Commonwealth Winter Games did not deter Tyke Richardson from organising them again in 1962, 1966, and 1970. He died in 1971.

Tyke Richardson's biography can be found here, and, aside from figure skating, it seems he was a keen sportsman. Apparently he also curled. And that information may go some way to explaining why there was a curling competition as part of the 1966 Games!

There's a report entitled 'Curling in the Commonwealth Winter Games' in the Royal Caledonian Curling Club Annual for 1966-67. This sits alongside other 'Reports of International Competitions'.

The report is by RCCC Council Member Tom Stewart, and reads, "The Curling Competition forming part of the Commonwealth Winter Games was held at St Moritz, Switzerland, on 27th/28th January, and took place on the St Moritz Curling Club Ice. Eight rinks took part - three from Scotland, two from England, two from Canadian Servicemen in Europe, and one rink provided by the St Moritz Club. The Scottish Rinks were skipped by the Royal Club President, Bill Robertson Aikman, Bob Grierson, and veteran Bob Dick; the English Rinks by Dan Kerr and Bill Black; the Canadians by Wing Commander G Robertson and LAC Bangle, and the St Moritz rink by Henry Martineau.

About 11.00 pm on Thursday, 20th January, the President (who seemed somewhat surprised that it had actually happened) found his party all present and correct at London Airport. The party was richly enhanced by the inclusion of the four charming wives of Bob Grierson and his rink.

An uneventful flight was followed by a pleasant train journey through magnificent scenery and in brilliant sunshine and the party reached St Moritz about 11.30 am. We were greeted by Harry Martineau and Jimmy Niven of the St Moritz Club, and Bobby Zen Ruffinen was who to be our 'mine host' for the duration of our stay.

The party took part in competitions at the St Moritz Engiadina Club (18 rinks), the highlight being the St Moritz Curling Derby with an entry of 36 rinks from all over Switzerland and including two rinks from Sweden. Scotland No 1 (Bill Robertson Aikman) finished best of the visiting British rinks being 13th with 31 points - the winners notching a total of 40 points. But for losing his last two games by one shot, Bill might well have been in the first three. The weather wasn't too good and the ice conditions varied considerably.

On Thursday afternoon when the opening round of the (Commonwealth Winter) Games was played, conditions were not ideal and the three Scottish Rinks made their exit - a disappointing effort perhaps, but conditions were the same for everyone, and we seek no excuse.

Conditions were better next day and in the semifinals Dan Kerr fell to the Canadians and Harry Martineau to the London rink of Bill Black. The final was close and exciting and eventually the Canadian Air Force rink, skipped by Wing Commander George Robertson, proved too good for Bill Black.

Both rinks are to be congratulated in winning the Gold and Silver Medals respectively.

At the presentation Cocktail Party given by Harry Martineau, Bill Robertson Aikman presented an RCCC plaque to the St Moritz Club, and a Scottish Standard to each of the skips. Each competitor was presented with a Commonwealth Winter Games souvenir badge.

We cannot speak too highly of the hospitality received during our stay, and would like to record our thanks to the St Moritz Club, Harry Martineau, Jimmy Niven, Bobby Zen Ruffinen and many others who did so much to make our visit a success.

We were also very pleased and delighted when our old friend Collie Campbell flew in from Canada to spend a few days amongst us. Needless to say, 'Night Class' and 'Morning Class' were immediately resumed and thoroughly enjoyed. The indefatigable Collie does a 'whale of a job' for curling everywhere and it was a tonic to see him looking so well and carrying his ambassadorial work to Switzerland.

It was with regret that the party, by now a little 'battle weary', broke up on Saturday, 29th. Bert Sibbald and Ronald Grant went on to Kitzbuhel, Tom Stewart to Zermatt and the remainder back to London, Manchester, Glasgow, Edinburgh, Inverness, Aberdeen and Stranraer."

James Niven, Secretary of the host St Moritz Club, added the following, "None of the three Scottish Teams struck form, but this had something to do with the ill health from which many of them suffered. An excellent performance was put up by Henry Martineau's St Moritz CC Team who first beat the Canadians, skipped by LAC Bangle, and were wearing down Bill Black's Surrey Team in a ding-dong game and standing at four-all when, with one stone to play, St Moritz were lying six without a guard and Bill Black drew the winning shot, and went on to win.

In the final, the Surrey Team from the London Province played well at the start, but were eventually beaten by the consistency of the cheery Canadians who were very well skipped by George Robertson, RCAF." 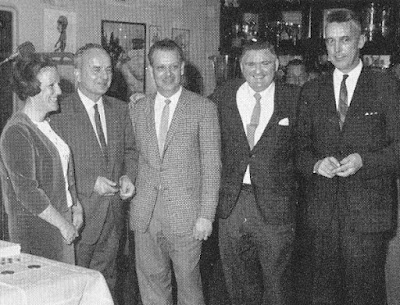 This is captioned, "The Canadian Air Force Rink from Metz, France, who won the Gold Medals in the Curling Competition in the Commonwealth Winter Games at St Moritz. Left to right: Mrs Martineau, who presented the medals, Joe Zedan, Ron Found, Scotty Miller and Wing Commander George Robertson (skip). The runners-up, who won silver medals, were Bill Black, Davie Kennedy, Jock Marr and Jim Adams. (The photographer is not stated.)

Images are as stated in the text. Many thanks to Karl Magee for his help with this article.
Posted by Bob Cowan at 14:51

I’m researching the history of a Bentley car which I now own. Its first owner was Henry C Martineau back in 1954. I understand both he and his stepfather, Hubert, were important figures in the St Moritz Club. There is a reference to Harry Martineau and a Mrs Martineau in the piece. Any information regarding the Martineaus would be very much appreciated. Henry was a Bob sled captain in the late 20’s and was obviously an interesting character. In anticipation, many thanks, Nigel