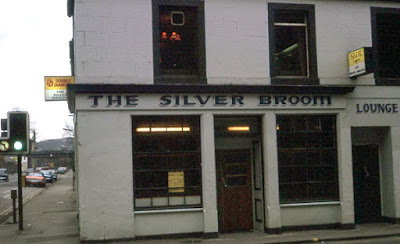 CIP-15. Does anyone have memories of drinking in The Silver Broom pub in Perth? (35mm transparency, Bob Cowan) 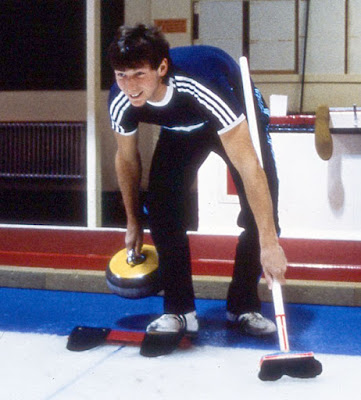 CIP-16. Another 'When We Were Young' pic. This is a very young Mike Hay, for a series of coaching slides used in the 1980s, before the no-backswing delivery began to be taught. Mike was the British Olympic Association's chef de mission for the 2018 Winter Olympics in Pyeongchang. (35mm transparency, photographer not known.) 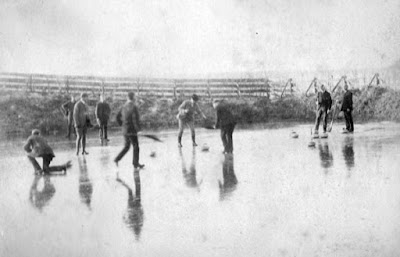 CIP-17. Outside play in a photo dated January 7, 1891. This is one of a series of photos from January 1891, rescued from an old family album. It's amongst the oldest I have in my collection. The original (15x10.4 cm) is rather faded, and has been enhanced to produce the above. The provenance is unknown, but the location could be the pond in the grounds of Cambo House, Kingsbarns, Fife (see here). Can anyone confirm this? 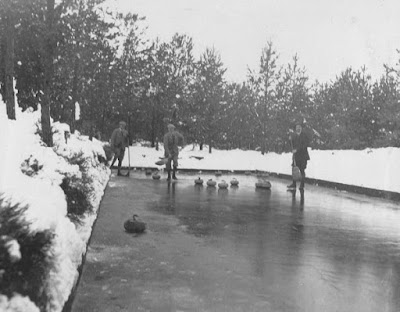 CIP-18. Play on an outside 'Cairnie-style' artificial rink. Rescued from an old album with five others. Sadly no provenance, nor date, nor place. Ideas, anyone? The original is a 12x9 cm print, photographer unknown. 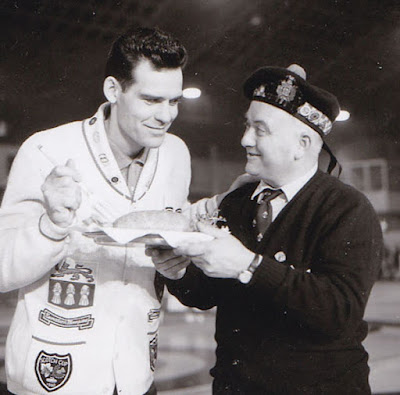 CIP-19. "It's a haggis!" Scotland's Willie Young tempts Canada's Wes Richardson with a recently shot haggis at the 1962 Scotch Cup. (From a 6x6 cm contact print, by Michael Burns Photography.) 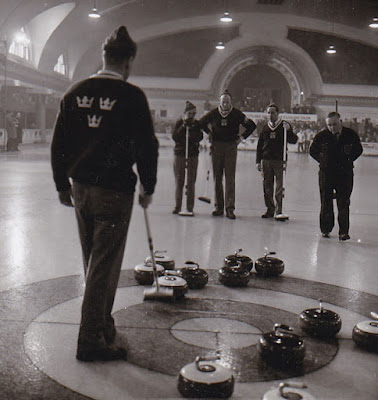 CIP-20. The Swedish team (Rolf Arfwidsson, Knut Bartels, Per Ivar Rydgren, and Arne Stern) contemplates its next play at the 1962 Scotch Cup at the Haymarket Ice Rink, Edinburgh. Scotland's Willie Young is on the right. (From a 6x6 cm contact print, by Michael Burns Photography.) Note that you can watch some of the live action in the original promotional film here, and here. 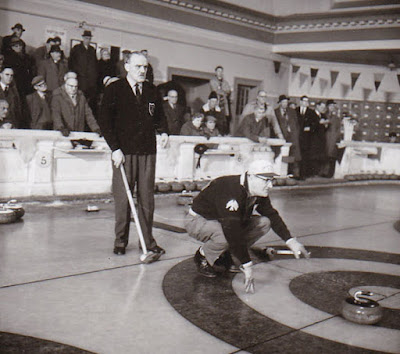 CIP-21. Spectators watch USA's Fran Kleffman and Scotland's 3rd player John Pearson at the 1962 Scotch Cup at the Haymarket rink in Edinburgh. The USA team was Dick Brown (4th), Terry Kleffman (3rd), Fran Kleffman (skip and 2nd), and Nick Jerulle (lead). Scotland was Willie Young (skip), John Pearson (3rd), Sandy Anderson (2nd) and Bobby Young (lead). Note the lockers, back right. Were these used by local club curlers to store their own stones? Anyone confirm this? (From a 6x6 cm contact print, by Michael Burns Photography.)
ADDED LATER: Trevor Dodds has confirmed that the lockers were indeed used to store stones, and curling gear, right up until the rink closed in 1979.

The source of images are as indicated. For more Curling Image Project posts go here and here.
Posted by Bob Cowan at 16:15